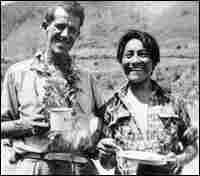 Edmund Hillary (left) and Tenzing Norgay, his Sherpa guide, after their return from the summit of Mount Everest in 1953. Keystone/Getty Images hide caption 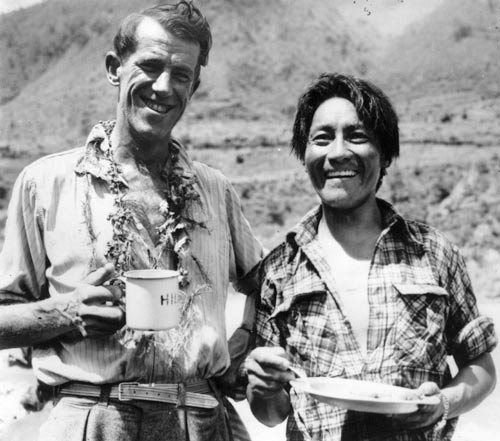 Edmund Hillary (left) and Tenzing Norgay, his Sherpa guide, after their return from the summit of Mount Everest in 1953.

At the end of the century, I wanted to do a story on Sir Edmund Hillary. All the experts in the United States were carrying on about, essentially, the same characters — Ruth, Jordan, Ali, maybe Jim Thorpe. But I thought that what Hillary had accomplished with the late Tenzing Norgay, his Sherpa guide, was perhaps the single greatest sporting achievement of the 20th century.

In my quest to find Sir Edmund in New Zealand, I called a journalist there. Might he tell me where I could find someone who had Hillary's telephone number? Just a minute, he said. Oh, have you got it, I asked? No, he replied, it's just right here in the phone book. That's right. Anybody could ring up the greatest citizen of the country, the guy on the five-dollar bill, the hero who stood first on the top of the world.

That probably says as much about what Sir Edmund was like as anything does. Well, really, not Sir Edmund. When he found he had to change our appointment, he politely called my house. I was away, so he told my wife it was Ed Hillary calling. "Who?" she asked, struggling with his Kiwi accent. Finally, reluctantly, he acknowledged that he was indeed "Sir Edmund Hillary." He apologized that he had to change our date, but it seemed that President Clinton was going to be in New Zealand and, being a wise politician, wanted Sir Edmund with him. Sorry about that.

My wife said she was sure I'd understand.

In a suburb of Auckland, Hillary lived on a high hill with a vista of the harbor, but significantly, a large Himalayan tree he'd been given, rises higher still over the house on the hill. It's good maybe that you're reminded that no matter how high you go, except maybe on Everest, there is really something always higher.

These latter years, he lived with his second wife, June, and a large tabby cat, Big Red. Both the Hillarys had been widowed. Ed's first wife, Louise, died in a plane crash, along with their daughter, Belinda, when the plane went down leaving Katmandu. He had just put them on it.

The reason the Hillarys were in Katmandu is because after Sir Edmund became famous for conquering the sacred peak that the people there call Chomolungma, he kept coming back to Nepal all his life to help the people and the land. It became his second quest in Nepal.

At first, when he came down from the summit in May of 1953, many Nepalese didn't embrace Hillary, the outsider who had breached their peak. Hillary made sure to say that Norgay had reached the top a few steps before him. Just before he died in 1986, Norgay finally wrote the truth, that Hillary had in fact been first, and Hillary substantiated that.

But, he was quick to tell me, "Believe me, to mountaineers, who's first is not important. We're a team."

In fact, he admitted that he'd felt a little guilty days before when he wasn't sure whether he really wanted his friends, Tom Bourdillon and Charles Evans, to make it to the top first. They had to turn back barely 300 feet short.

"I wasn't very proud of my feelings," Hillary admitted to me, ruefully patting the old cat in his lap.

Two days later, Hillary and his teammate made it, and all things considered, I'd have to say that I think God picked the right guy to first stand so close to heaven on earth.