Accessibility links
Intelligence Estimate on Iran Cuts Both Ways Last month's National Intelligence Estimate, which concluded that Iran suspended its nuclear weapons program in 2003, undercut the Bush administration's previous characterization of the Iranian threat. But it also may have had the indirect effect of strengthening moderates in Iran.

First of a two-part series. 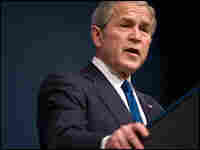 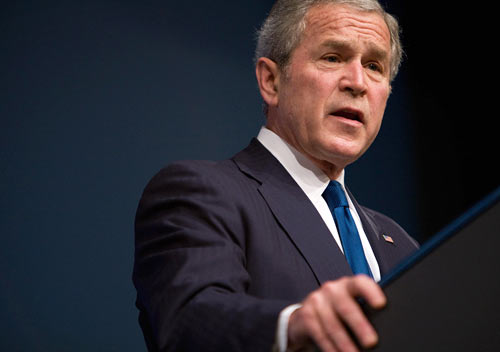 President Bush delivers a speech in Abu Dhabi on Sunday in which he called Iran the world's leading state sponsor of terrorism.

Part 2 of This Series

Tom Gjelten reports on the continuing fallout from the release last month of the latest National Intelligence Estimate on Iran.

Wednesday: The NIE's conclusion that Iran suspended its nuclear weapons program in 2003 undercut the Bush administration's previous characterization of the Iranian threat.

Thursday: Should intelligence officers even worry about the repercussions of what they report or should they just let the policymakers deal with the consequences?

Read the NIE on Iran 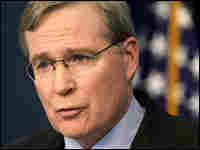 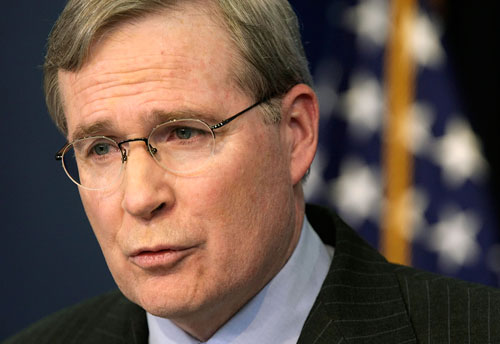 The shock wave set off last month by the release of the key judgments of the National Intelligence Estimate (NIE) on Iran continues to reverberate. The headline conclusion — that Iran suspended its nuclear weapons program in 2003 — undercut the Bush administration's previous characterization of the Iranian threat, and the repercussions are still being felt.

Iranian President Mahmoud Ahmadinejad, who has repeatedly mocked and defied the United States, initially called the NIE "a declaration of victory for the Iranian nation against the world powers." He and other Iranian leaders had insisted that their country's nuclear program was purely for peaceful purposes — to produce energy. The United States said it was to build a nuclear bomb, and it appeared the Bush administration was even considering a military strike to halt the program. But the NIE conclusion that the weapons program had been suspended — at least temporarily — made the military option impossible.

Michael Rubin, an Iran scholar at the American Enterprise Institute, says hardliners in Iran have tried to use the NIE to consolidate their political position.

"What you often have," Rubin says, "both on the nuclear issue and also when it comes to the greater diplomatic issues, [are] people who are favorable to the current president, Ahmadinejad — a hardliner — saying '[Mohammed] Khatami, the former reformist president, failed to bring the United States to the table. Our defiance has been what has brought the United States to its knees.'"

But the NIE cut two ways: Ahmadinejad had been arguing that Iranians should rally behind him, to stand up to the U.S. war threat. Now he won't be able to make that case.

"The NIE report, in effect, took the wind out of the war campaign in the United States," says Vali Nasr of the Fletcher School of Law and Diplomacy at Tufts University. "That may have the effect of refocusing domestic political attention in Iran back on Ahmadinejad's domestic record, on his economic record, right ahead of the March parliamentary elections. So in some ways, it may not necessarily benefit him."

In this sense, the release of the NIE may have had the indirect effect of strengthening moderates in Iran.

President Bush has apparently failed to see any such change. On his Middle East trip this week, he urged Arab allies to stand up against Iran "before it is too late," saying Iranian actions "threaten the security of nations everywhere."

Once again, however, it seemed the NIE had changed the political dynamic. In Saudi Arabia, Al Riyadh, a newspaper that reflects the viewpoint of the Saudi government, immediately challenged President Bush over his characterization of the Iranian threat, advising him "not to preoccupy himself with a danger U.S. intelligence has qualified as nonexistent in the short term."

Nasr says the NIE changed the way Arab countries view the United States and its policy options for dealing with Iran.

"The Arab governments around the Persian Gulf have been very worried about the rise of Iranian power," Nasr says, "but what worries them more is that they don't believe the U.S. can execute an effective policy. Any time an administration is undermined by its own intelligence agencies and its policy looks like it's collapsing, Arab governments become nervous."

A senior intelligence official directly involved in the preparation of the NIE judgments says they were not written for public consumption (the decision to release them came later), so there was no reason to consider all the possible consequences.

Paul Pillar, a former CIA analyst who worked on many estimates as the National Intelligence Officer for the Near East, says it may not have been possible for the authors of the latest NIE to consider whether their report would mean a moderating or a hardening of Iranian political behavior.

"Even today, looking at what's happening before our very eyes and reading what we read every day in the newspapers," Pillar says, "it's hard to say which is the dominant effect, so it would be even harder for the authors of something like this estimate to anticipate accurately in advance just what the impact would be."