Accessibility links
Moldy Peaches Reunite on 'Juno' Soundtrack Kimya Dawson, half of the New York City folk band The Moldy Peaches, plays six songs on the soundtrack to the movie Juno. Dawson talks about how a movie can change the way you hear your own music, and plays songs from the soundtrack.

'Anyone Else But You' 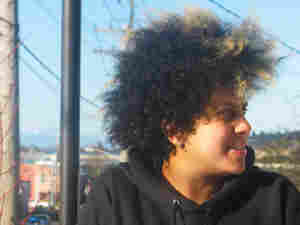 Kimya Dawson's songs make up most of the soundtrack for the movie Juno. Rhett Nelson/Courtesy of K Records hide caption

Kimya Dawson, of the band The Moldy Peaches, talks about how her songs ended up in the film Juno and expounds on her great love for Whoopi Goldberg. She and bandmate Adam Green also sing some songs.

Jason Reitman, the director of Juno, asked star Ellen Page what she thought her character would listen to. She mentioned The Moldy Peaches, so Reitman got in touch with Dawson and Green and asked them if he could use their song "Anyone Else but You." Later, after Dawson thought the movie was wrapped, Reitman asked if he could hear some of her more recent work. She obliged him with some songs she'd been writing for her toddler, and, much to her surprise, those songs also ended up in the film.

Dawson said she was happy to see the movie's characters singing "Anyone Else but You." "Those kids are so cool and weird and sweet," she says. "They're nice little freaks. I felt like they were not too far from the kids we were when we wrote that song." At the time, Green was 18 and Dawson was 27. When they wrote it, they were both looking for love, but not with each other.

Dawson says she wouldn't do another film unless she felt as positive about it as she does about Juno. This one is getting The Moldy Peaches on The View later this month, much to Dawson's excitement — partly because she's always wanted to meet Whoopi Goldberg and partly because she sees The Moldy Peaches' music as something the show's audience needs. "Seriously, think about it," she says. "Some people are at home. They don't want to be there. They want to be out having adventures, and they're trapped in this life that they've been told they're supposed to be living... If they don't want to do it, they should go out and rock."