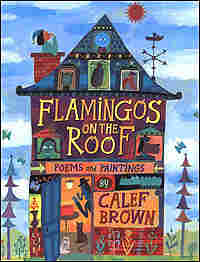 In Flamingos on the Roof, Calef Brown paints his quirky characters in bright jewel tones to illustrate his whimsical stanzas. hide caption 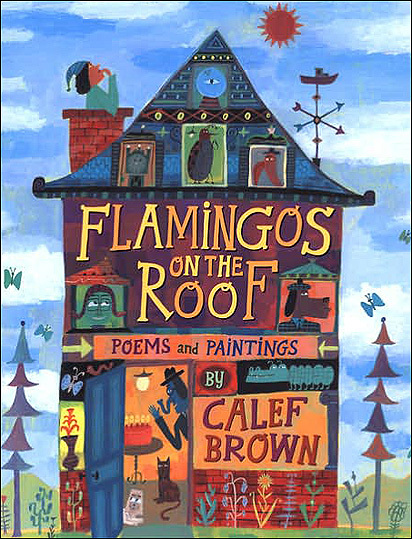 In Flamingos on the Roof, Calef Brown paints his quirky characters in bright jewel tones to illustrate his whimsical stanzas.

Brown, an acclaimed author and illustrator of four children's books, brings these images to life in his wacky new collection of poems and paintings, Flamingos on the Roof. He creates a carefree world in a variety of rhymed meters that are full of alliteration, frivolity and fun. Known for his eccentric poetry collections, including Polkabats and Octopus Slacks, Brown's imaginative humor shines through in 29 new notable poems.

In one poem, "Weatherbee's Diner," Brown paints a cheerful diner — clad in a yellow rain slicker — waiting for the day's stormy servings:

Whenever you're looking for something to eat,
Weatherbee's Diner is just down the street.
Start off your meal with a bottle of rain.
Fog on the glass is imported from Maine.
The thunder is wonderful, order it loud,
with sun-dried tornado on top of a cloud.
Snow flurry curry is also a treat.
It's loaded with lightning and slathered in sleet.
Cyclones with hailstones are great for dessert,
but only have one or your belly will hurt.
Regardless of whether it's chilly or warm,
at Weatherbee's Diner they cook up a storm!

Children of all ages can test their tongues with witty wordplay in "Allicatter Gatorpillar," where a creature that is half alligator, half caterpillar sings songs and bares his teeth. In another poem, "Sally," children are introduced to Medusa's sister who has a "single lazy snake" where her hair should be. Each poem has an abstract illustration that draws in the reader's eye, expanding on the story within. 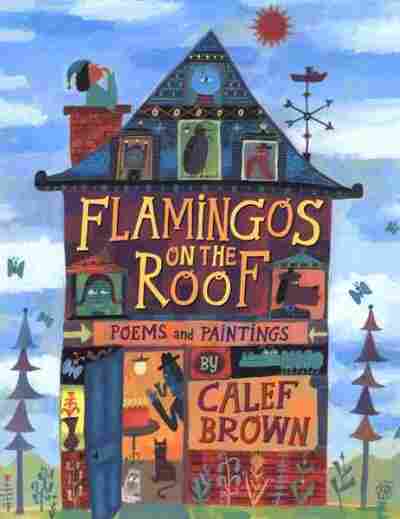 Flamingos On The Roof