Accessibility links
High School Teaches Thoreau in the Woods The Walden Project, an alternative high-school program in northern Vermont, focuses on environmental studies and the teachings of Henry David Thoreau, who did some of his best thinking outdoors at Walden Pond. 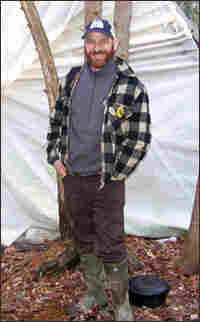 Matt Schlein, founder of the Walden Project, raised the money to buy 260 acres the students now use as their classroom. Larry Abramson, NPR hide caption 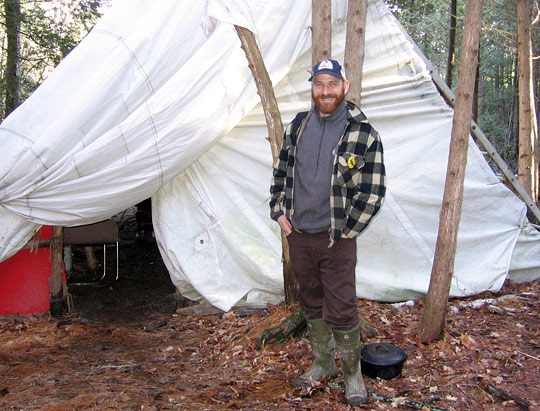 Matt Schlein, founder of the Walden Project, raised the money to buy 260 acres the students now use as their classroom. 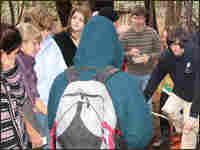 Students build a fire to keep warm and to cook lunch. They often eat from a nearby communal garden they help maintain. hide caption 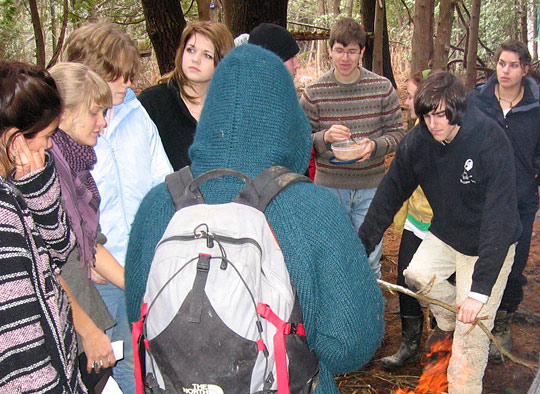 Students build a fire to keep warm and to cook lunch. They often eat from a nearby communal garden they help maintain. 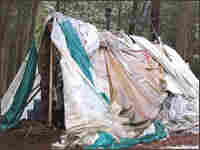 This is the simple shelter students use as protection against the weather. The woodburning stove (see the chimney?) is functional. The gray satellite dish to the right of the chimney is a joke. Larry Abramson, NPR hide caption 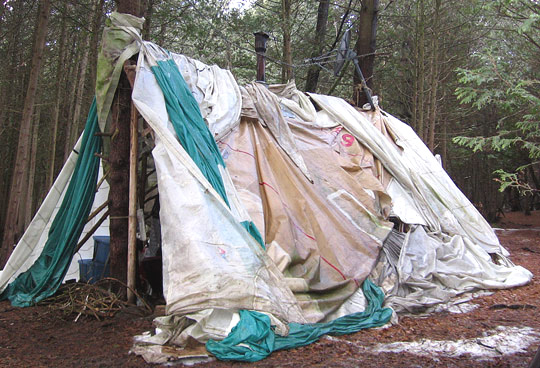 This is the simple shelter students use as protection against the weather. The woodburning stove (see the chimney?) is functional. The gray satellite dish to the right of the chimney is a joke. 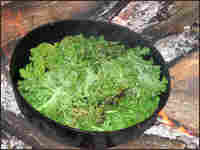 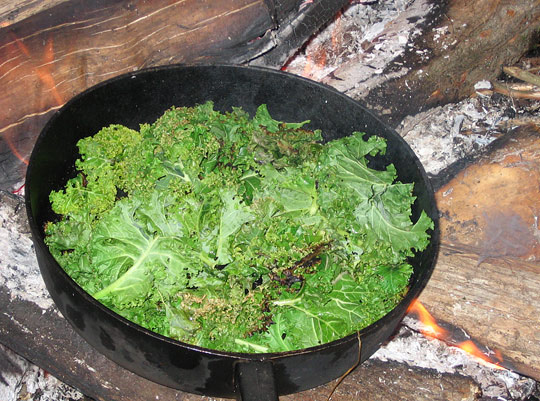 While some students lunch on sauteed homegrown kale, others dine on marshmallow fluff sandwiches.

Place-based classroom. The curriculum revolves around stewardship of the land, specifically the 260 acres the school uses for classes.

An integrated curriculum. Rather than teaching each subject as a separate discipline, Walden students move seamlessly between subjects.

The philosophy of H.D. Thoreau. Thoreau went into the woods to "live deliberately." Just as Thoreau did, students think deeply about their relationship to self, to culture and to the natural world.

Stay outside. Students are outdoors two days of the week in the winter, three days a week in spring and fall. They may also participate in some programs at Vergennes Union High School, the traditional school that serves as Walden's home base.

Teachers across the country offer to take the class outside when the weather is nice, but one program offered by a high school in northern Vermont holds classes outdoors all year long.

The Walden Project is an alternative program focused on environmental studies and on the teachings of Henry David Thoreau, who did some of his best thinking outdoors at Walden Pond.

Matt Schlein, a New York native, is 50 percent of the staff at Walden. After years teaching in a traditional high school, Schlein started a foundation that raised the money to buy the 260 acres that the Walden Project uses as its classroom.

Two or three days a week, Schlein drives through the farmlands around Vergennes, Vt., parks his well-used Toyota next to a 200-year-old barn, grabs some vegetables from a garden he maintains and walks nearly a mile through the woods.

On one school day in early January, Schlein gets to a spot where 19 students sit on a motley collection of old chairs and benches. Schlein starts to read from Thoreau's essay "Walking."

"Life consists with wildness. The most alive is the wildest. Not yet subdued to man. Its presence refreshes him," Schlein says.

Students switch classes without much ado at the Walden Project. There's no need to go out in the hall or grab a new book. That's because everything is related, so class discussion about the recent primary vote in neighboring New Hampshire is just another aspect of the school's simple mission. Like Thoreau, students are supposed to be exploring their relationship to self, their relationship to culture and their relationship to the natural world.

The natural world has a way of grabbing you by the lapels out here. The week prior, it was several feet of snow and sub-zero temperatures; now it's a sudden downpour. The students take shelter in the only escape they have from the elements: a rough-hewn tent that features donated sail material. It's just big enough to accommodate the class and a few visitors. Students continue their discussion of politics while rain patters against the sails.

Schlein seems aware that a curriculum shaped around Henry David Thoreau could be grim. The cranky 19th-century philosopher and naturalist who gave up on city life isn't exactly the kind of role model most teenagers would pick.

"Do you ever get tired of him?" I ask Beth Kirschner, a former student who is visiting the school during a break from her studies at the University of Vermont.

"We do, we definitely do," she says, laughing. "We make jokes about him, we make fun of him, but then in the more serious times, we kind of come back to him and his basic message. So it's a love-hate relationship with 'H.D.', as we call him, or 'H-Dog.'"

That same sense of humor led someone to affix a satellite dish to one of the trees that supports the shelter. It's not connected, of course, and there's no electricity out here anyway. But it's perhaps a nice reminder that Thoreau regularly went into town while he isolated himself out at Walden Pond.

Not a Pressure Cooker

The next class is ecology, and there's lots to study on the Walden Project plot. The group tramps through melting snow and arrives at a clump of hemlock trees.

The trees have grown tall and are blocking out other plants. One student, Jamison Bannister, has made a student project out of trying to manage this corner of the property. He's going to cut down a few trees and see if he can encourage a greater diversity of species.

On the walk back from the woods, some of the students horse around — a lot. In fact, it's a little hard to imagine how some of these students could ever sit still in class for a full day. Many students come here because they can't handle the confines of the classroom.

For others, they simply weren't thriving in traditional high schools.

Hillary Devoss, a senior in her third year at Walden, says she just wasn't happy in high school.

"I wasn't very engaged in my education. I kind of was failing all my classes. I really care a lot about my education now, which I didn't before," Devoss said.

The Walden Project wants to teach students about this place — rather than giving them the same lessons they could get anywhere in the country. That means students who choose to apply to this program have to give up something — there's no calculus, no lab science.

Jennie Johnson, a senior walking with her friend, Joe, says something else is missing — the social games that make high school such a pressure cooker.

"Like Joe and I would never have talked last year, and now we're really good friends," Johnson says. "He was a cool kid, I guess, and I wasn't. And we talk all the time, and it's nice."

On days when students are not in the woods, they pursue internships nearby in Burlington, Vt., or attend writing workshops. Walden kids are more likely to go to college than are students at the high school they came from.

But it's not for everyone. You have to like being with the same 20 students all year long, you have to like the cold, and you'd better like Schlein's winter specialty — garden-fresh, pan-fried kale.

More on Thoreau and his writings