Accessibility links
Iran NIE Reopens Intelligence Debate Analysts who prepared the NIE on Iran knew they would cause a stir by reversing earlier judgments on Iran's nuclear weapons program. Some NIE critics say the drafters should have written it differently, while others may have not wanted to be accused of enabling another march to war. 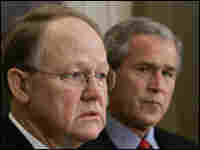 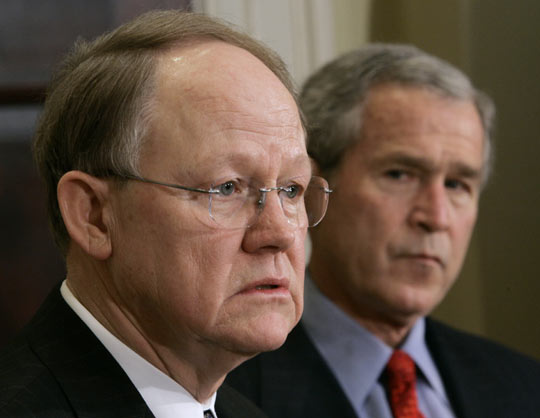 Tom Gjelten reports on the continuing fallout from the release last month of the latest National Intelligence Estimate on Iran.

Wednesday: The NIE's conclusion that Iran suspended its nuclear weapons program in 2003 undercut the Bush administration's previous characterization of the Iranian threat.

Thursday: Should intelligence officers even worry about the repercussions of what they report or should they just let the policymakers deal with the consequences? 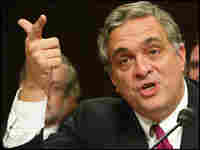 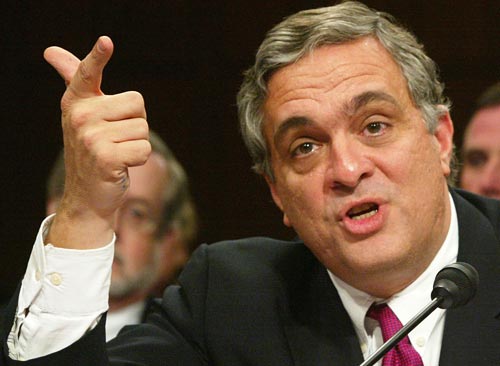 Then-CIA Director George Tenet makes a point as he testifies April 14, 2004, before the 9/11 Commission. He defended the agency's pre-Sept. 11, 2001, efforts on combating terrorism.

Read the NIE on Iran

A National Intelligence Estimate released last month indicating that Iran halted its nuclear weapons program in 2003 has reopened a simmering debate over how the Bush administration shapes intelligence findings to fit its policy objectives.

But it has also drawn attention to how such intelligence is presented. Buried deep into the 140-page Iran NIE was another conclusion: that Tehran had previously been working to build a nuclear bomb and still had some of the elements for a weapons program.

Former CIA analyst Paul Pillar, who helped write many estimates as the National Intelligence Officer for the Near East, said the authors of the report would have known that a lot was riding on the way they presented their conclusions.

Some NIE critics say the drafters should have written it differently, to emphasize the evidence of Iran's continuing interest in nuclear weapons. But a senior intelligence official involved in the NIE preparation said the emphasis on the halt in Iran's weapon program was proper. "We got new information that we judged to be credible," he said, "that changed a judgment on a key point."

The NIE on Iran's nuclear program was written against the background of the controversy over intelligence on Iraq a few years ago. When it turned out that there were no weapons of mass destruction in Iraq, the CIA and other agencies were criticized for not having made clear that the WMD evidence was shaky.

Paul Pillar said the NIE drafters might have wanted to avoid being accused again of enabling a march to war, this time with Iran.

"If the intelligence community is going to be criticized in many of the ways that it was in the Iraq case, then one should not be surprised that ... the estimators might have shaped an estimate in a way that would take this military option off the table," Pillar said.

This is "part of the price the country pays for vilification of its intelligence agencies," he added.

Some administration hard-liners, not surprisingly, are pushing back. The Wall Street Journal this week anonymously quoted a long-time aide to Vice President Dick Cheney as saying that the NIE authors "knew how to pull the rug out from under us."

Senior intelligence officials counter that no one has yet challenged the hard evidence provided for the NIE conclusions — only the presentation.

But this week President Bush himself came close to saying he doesn't agree with the NIE judgment. According to the estimate, "Iran's decision to halt its nuclear weapons program suggests it is less determined to develop nuclear weapons than we have been judging since 2005."

In an interview with Fox News, the president was asked if he believed the NIE. Bush shrugged and said he believed the professionals who prepared the NIE, were "very sincere in their analysis." But then he gave his own view of the Iranians' intentions, and it was not quite consistent with the NIE.

"I believe they want a weapon," he said, "and I believe that they're trying to gain the know-how as to how to make a weapon under the guise of a civilian nuclear program."

Director of National Intelligence Mike McConnell has not responded to criticism of the NIE, but neither has he apologized for its conclusions.

"We're attempting to earn the trust of the American public as well as professionals in the intelligence community," McConnell said Wednesday in a speech to students at St. Mary's College in Maryland. "We're not political; we're professional. And we're going to go collect that information and we're going to provide it to a set of decision-makers that are going to have different points of view."

In a speech in November, McConnell was asked how he would respond if he found the Bush administration misusing the Iran intelligence.

"If it were cherry-picked in an inappropriate way," McConnell said, "then for me, there's a professional obligation to object, and I would submit my resignation."