Accessibility links
S. Carolina Towns Cope with Economic Fallout The northwest corner of South Carolina has built up one of the country's most successful global high-tech manufacturing corridors. But there remain economically depressed areas of the state where residents are left to cope with shuttered mills.

The northwest corner of South Carolina has built up one of the country's most successful global high-tech manufacturing corridors. But there remain economically depressed areas of the state where residents are left to cope with shuttered mills. 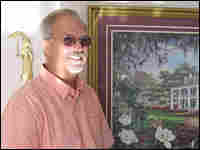 Fred Salters worked for Springs Industries in Lancaster, S.C., for 32 years. Since he was laid off in 2006, Salters has retrained to become a nurse's assistant, and now takes care of his mother, who also once worked at the textile company. Emily Ochsenschlager, NPR hide caption 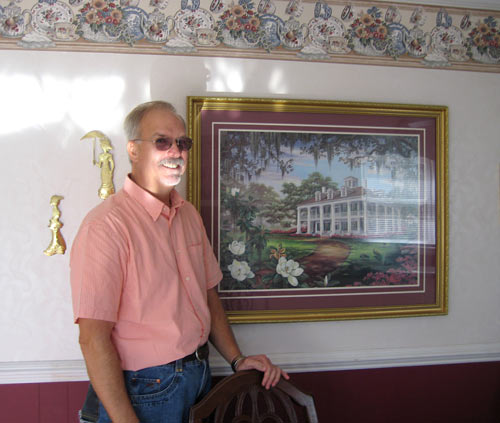 Fred Salters worked for Springs Industries in Lancaster, S.C., for 32 years. Since he was laid off in 2006, Salters has retrained to become a nurse's assistant, and now takes care of his mother, who also once worked at the textile company.

Part 2 of this Report

The next presidential primary comes just as the economy emerges as a major issue. And the next state up is going through big economic changes. Republicans vote Saturday, Democrats, a week later in South Carolina. It's the birthplace of one presidential candidate, John Edwards.

JOHN EDWARDS: In my hometown, the mill that my father worked at and the people that I grew up with, that mill is closed now. The jobs are gone.

INSKEEP: NPR's Adam Davidson found another place where people are prospering, which is where, Adam?

ADAM DAVIDSON: They say this is an area that has made the move into the 21st century and is doing well. Just for an example, I talked to Bunny Richardson(ph). She's a native South Carolinian and a spokesperson for BMW's plant in Spartanburg.

BUNNY RICHARDSON: If I'm forceful and you think I'm getting angry, it's - because it's stereotypical and it's not accurate for the entire state.

DAVIDSON: Much of South Carolina is doing well. Tourism is booming on the coast and up in the Northwest, what they call Upstate or the I-85 corridor, things were not at all what I expected. There are hundreds of high-tech good-paying factories here. BMW has a plant. But as Richardson says...

RICHARDSON: BMW was the 76th German company to come into South Carolina.

DAVIDSON: I went to AFL Telecommunications, a Japanese-owned company that makes fiber optic cables. Rebecca Jennings(ph) is running the machine that coats the cables in plastic.

REBECCA JENNINGS: We have compounds and you have the color chips that drop down, they're heated up, comes to the comes to the extruder, here...

DAVIDSON: It's a ridiculously complicated machine that Jennings runs by herself.

DAVIDSON: Jennings has been here for 12 years and she's still can't quite believe it. She's 57 and spent most of her life in one of those textile mills. Her whole family worked there. But she didn't make much money.

JENNINGS: There was no savings plan, no 401(k). That was it, you know, not really good at all.

DAVIDSON: Tom Quantrill(ph) says there are tens of thousands of people just like Jennings, former textile workers now making more in high-tech factories. He runs advanced composite materials, which makes a kind of artificial diamond used to cut and shape jet engine parts. He remembers a few years ago when a bunch of textile factories closed all at once.

DAVIDSON: South Carolina as a state is among the poorest, unemployment is higher than national average is, income is lower. But the Upstate region where I was, it is the opposite. Incomes are higher than the U.S. on average, unemployment is lower. The statistics seemed to confirm the story people kept wanting to tell me. This area where a quarter of South Carolinians lived has made the transition to a post-textile economy really well.

INSKEEP: We're listening to NPR's Adam Davidson. And, Adam, as we're about to hear not all parts of South Carolina are doing so well, which is going to raise the question what's the difference between a town that recovers and a town that doesn't?

DAVIDSON: So it was able to industrialize more quickly and thoroughly. It's a society, which is able to transform more quickly than other parts of the state. And then it has its huge advantage that it's located between these mega growth cities of Atlanta and Charlotte.

INSKEEP: Okay. Thanks very much, Adam. Interesting to hear you say that auto plants are among the firms changing the upper part of South Carolina because we've also been visiting people just a couple hours away who wish they had a plant in their town.

LINDA BURKES: I pray every day like, I said, for a car company come to this area, and we pray for it. So, you guys say prayers for us, okay?

INSKEEP: You pray every day for a car company, Linda?

BURKES: For a car company to come the - it's got every job you might want.

INSKEEP: The main company here was Springs Industries, which might have produced the Springmaid sheets on your bed. Its employees included Fred Sulters(ph) and his wife, and before that his mom.

FRED SULTERS: Everybody here - my mom told me when I considered going somewhere else to work she thought I was crazy. And she says there is no other place to work. You have to go to work at Springs.

INSKEEP: We met Fred Sulters in his kitchen where he showed us a bird in his cage and served us coffee. His elderly mother lay asleep in the living room so Sulters spoke softly explaining his family's long history with the areas textile mills.

SULTERS: I operated an old 7S70 computer. It would fill up that computer with - fill up two of these rooms and it wouldn't do as much as a PC will do today.

INSKEEP: Now, isn't strange at all to work for this company during all these years and knowing that its part of an industry that was clearly going through a lot of change?

DAVIDSON: Do the company back free trade agreements?

SULTERS: Yes. Yes. They encouraged us to back it.

DAVIDSON: How they encourage you?

SULTERS: Well they even bought t-shirts for us to wear on certain days that says, We Support NAFTA.

INSKEEP: And that helps explain why Fred Sulters is skeptical of what politicians tell them even today. He says he will vote in this month's presidential primary, but he's not happy about his choices. Like many people in this town, he's been out of work since Springs sent the jobs to Brazil.

DAVIDSON: So what is your income right now?

INSKEEP: Since he was laid off, more than a year ago, Fred Sulters has trained for a completely different life as a nurse's assistant.

INSKEEP: He's come to use his new skills at home. His mother has Alzheimer's.

SULTERS: You know, it doesn't seem like you could find anything good in any of the layoffs, but I'm laid off now and I can help my mom - she needs total care. The only thing she can do is pick a spoon and feed herself.

DAVIDSON: What are some things you'd learned to do that you do for mom?

SULTERS: Oh, gosh. Just simple things like moving her from a chair to a bed or from wheelchair to a chair.

DAVIDSON: How to do that comfortably without...

SULTERS: How to do that without hurting her. I have to bathe her, she can't do that herself. I have to remind her - she has forgotten how to sneeze.

SULTERS: That sounds so strange.

INSKEEP: And tomorrow we'll hear how more people in that area are adapting to a changed economy.