Accessibility links
New Gospel Music Collection Is a 'Classic' The compiler of Classic African American Gospel, a new collection from Smithsonian Folkways, talks about the roots of Motown in gospel music, its role in the Civil Rights movement, what new gospel sounds like and who's playing it.

When I Was Sinkin' Down

Go Tell It on the Mountain

It's Time to Make a Change 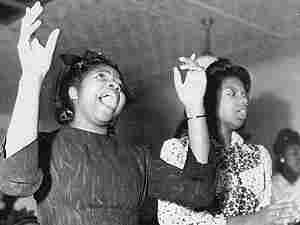 Members of the congregation of the Church of God in Christ in Washington, D.C., sing in 1942. Gordon Parks, courtesy of the Library of Congress, Prints and Photographs Division, FSA-OWI Collection hide caption

Kip Lornell, a George Washington University ethnomusicologist, compiled a new collection for Smithsonian Folkways called Classic African American Gospel. He talks about the roots of Motown in gospel music, its role in the Civil Rights Movement, what new gospel sounds like and who's playing it.

Lornell pulled together 24 songs, the oldest of which was recorded in 1948 or '49 by the Thrasher Wonders. If one thinks about African-American gospel music as really a 20th century phenomenon, this recording happens in the middle of its timeline.

Gospel reached its peak in terms of popularity among African Americans — and really crossed over, in terms of record sales and radio airplay to a mainstream (white) audience — in the 1940s and '50s. Lornell says that's when people were listening to the music not only in churches, but in municipal auditoriums, community centers and their homes.

But there had long been a mixing of the secular and the sacred in gospel music.

"If it's something that works, it's going to be used in a variety of contexts," Lornell says.

One of the performances in the collection, The Missionary Quartet singing "Dry Bones: Ezekiel Saw the Wheel," exemplifies the jubilee style of singing. This style is rooted in the black quartet tradition and was popularized in the 1930s by a group called the Golden Gate Quartet. Though the lyrics are religious, the music sounds like pop songs from the '50s and '60s.

"The connection between gospel quartet jubilee singing and doo-wop and ultimately Motown is very clear," Lornell says. "There is an undeniable continuum among all of those."

A major controversy in gospel music is the use of instruments and arrangements considered too secular for the religious nature of the songs. There was a real uproar at the end of the 1930s when the Rev. Thomas Dorsey, who performed blues music under the name Georgia Tom, turned away from blues and devoted his life to sacred music. But he couldn't leave the instrumentation behind. He composed some very well known songs, including "Precious Lord, Take My Hand," but he upset a lot of people with the changes he brought.

Gospel was an integral part of the Civil Rights Movement. Much of the movement was inspired by both words and music that were heard in the churches. In this collection, Fannie Lou Hamer sings "Go Tell It on the Mountain" at a rally in the early 1960s. People tend to forget that those involved in the Civil Rights Movement were putting their lives on the line when they attended rallies. One of the things that brought the audience together at these gatherings was the singing of songs that everyone knew and employed call and response.

Gospel music continues to be an important form of expressive music for people all over the country on Sunday mornings. The last song on the album, "It's Time to Make a Change," was recorded in 1994, by Madison's Lively Stones — a "shout band." They perform in a style begun by Daddy Grace, who founded the United House of Prayer for All People in the 1910s. In "shout bands" the music is made by all-brass ensembles, primarily different levels of trombones.