Accessibility links
'Cloverfield' Lady Liberty loses her head in this film's opening moments, and everything from the Chrysler Building to the Brooklyn Bridge comes tumbling down thereafter. Which sounds reasonably exciting, but the Blair Godzilla Project conceit gets annoying fast. 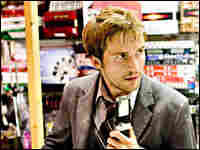 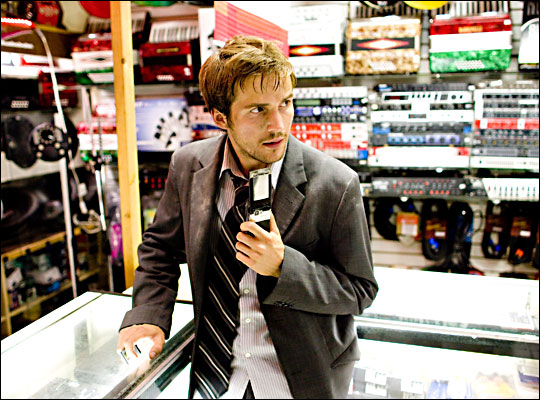 Unlikely hero: Rob (Michael Stahl-David) rides to the rescue in Cloverfield, but the movie can't be saved.

Apparently it's OK to lay waste to Manhattan again — at least on screen.

After a six-year moratorium, Hollywood started blowing up New York's bridges (in I Am Legend) as 2007 was drawing to a close. And it's kicking off 2008 by pulverizing a goodly portion of what's left: Liberty loses her head in this film's opening moments, and everything from the Chrysler Building to the Brooklyn Bridge comes tumbling down thereafter.

Which sounds reasonably exciting until you realize that you're going to have to witness all of it — every second of some 75 minutes of characterless action — in fuzzy camcorder footage recorded by a dimwitted party-boy, who takes his job seriously when a friend asks him to make sure he tapes anything notable at a farewell fete for a buddy of theirs.

Our hero's eye never leaves the viewfinder as the apartment building shakes; partygoers flee to streets, skyscrapers, and subways, all of them under seige by a large reptilian creature — and what appear to be the suitcase-size fleas that are presumably fueling its frenzy when the Army's grenade launchers aren't pointed its way.

Apart from the fact that a $25 million budget bought producer J.J. Abrams what looks like a poorly shot home movie — at the pitch meeting, someone must've said The Blair Godzilla Project — there's nothing unorthodox about this monster flick. It's going to leave a lot of viewers motion-sick, and will no doubt make a mint.