Accessibility links
Co-Creator of Frisbee and Hula Hoop Dies at 82 Richard Knerr co-founded Wham-O, the Pasadena, Calif., toy company responsible for turning the Hula Hoop, Frisbee and many other ingenious creations into iconic toys. Knerr died Monday in southern California at age 82, leaving behind a legacy of fun.

Listen
Co-Creator of Frisbee and Hula Hoop Dies at 82 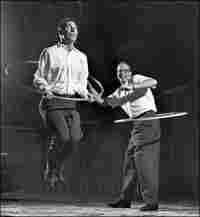 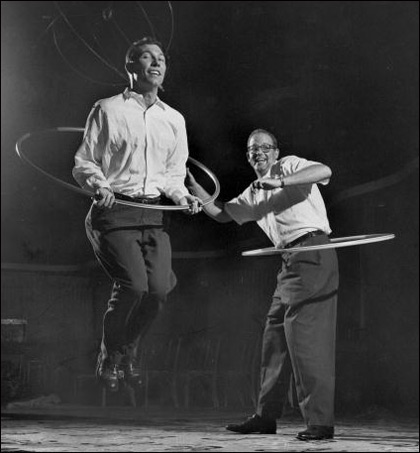 Richard Knerr, co-founder of the company responsible for turning the Hula Hoop, Frisbee and many other ingenious creations into iconic toys died Monday at age 82.

Knerr spent his final hours in Methodist Hospital in Arcadia, Calif., after suffering a stroke earlier in the day at his home. He left behind a legacy of fun.

Knerr and childhood buddy Arthur "Spud" Melin started a slingshot-selling business in 1948 in Pasadena and called their company Wham-O after what they said was the sound a slingshot made when it hit something.

"They were like John Wayne and Ernest Hemingway all rolled into one. They were all about fun," recalls Richard's son, Chuck.

Melin and Knerr had run a used-car store together in downtown Los Angeles before founding Wham-O. They started making slingshots, just for kicks, out of the ends of orange crates, Chuck recalls.

"Then their barber recommended they put an ad in a magazine and try mail order," he says.

At first business was slow — and the pair struggled to get by on just a couple dollars a day — but gradually the orders were pouring in.

A series of equally ingenious toys – including Slip 'N Slide, Silly String, the Hula Hoop and the insanely bouncy Superball – would soon follow.

All Knerr's creations had a way of bringing out the most mysterious aspects of physics, Knerr says.

"Superball was such a great one. I remember being so proud when that toy was banned from my school. Kids would just throw it on the ground and it would just take off to the ceiling, into lights."

Promoting the creations was a family affair. Knerr and Melin devised a test of an early version of the hula hoop in 1958 by holding demonstrations at parks. If subjects mastered the swing of it, they got to keep the toy.

"[My mother] and Spud's wife would demonstrate hula hoops in parks and recreation centers around the country," Chuck says.

Soon, Wham-O was producing 20,000 hoops a day. Within four months, 25 million hoops had been sold, according to Wham-O, and hooping was an integral part of American youth culture.

"They really liked enjoying life and enjoying their toys, and they really wanted to share that sense of fun," he says. "I think he proved the American success story."