Accessibility links
Gates' Criticism of Afghanistan Forces Riles NATO Defense Secretary Robert Gates tries to soothe NATO anger over comments he made to the Los Angeles Times in which he seemingly criticized NATO forces in Afghanistan. NATO has been criticized by the Pentagon for "not doing enough" in Afghanistan.

Defense Secretary Robert Gates tries to soothe NATO anger over comments he made to the Los Angeles Times in which he seemingly criticized NATO forces in Afghanistan. NATO has been criticized by the Pentagon for "not doing enough" in Afghanistan.

At the Pentagon today, Defense Secretary Robert Gates worked to smooth over relations with other NATO countries. Earlier this week, Gates described the U.S. allies as unprepared to fight the Taliban in Afghanistan; that upset some NATO members. One British lawmaker called Gates's comments outrageous.

GUY RAZ: The Defense Secretary had a bad day yesterday. In an interview with the L.A. Times, he was quoted as saying that NATO troops in Afghanistan don't know how to do counterinsurgency operations; that comment rippled through defense ministries across Europe and in Canada. The Dutch defense minister summoned the U.S. ambassador, NATO's secretary general held a press conference to defend NATO's forces, and since then, Gates has been working the phones, calling his NATO counterparts trying to say he didn't mean what he said. And he used today's news conference at the Pentagon to underline his point.

Mr. ROBERT GATES (Secretary of Defense): Allied forces have stepped up to the plate and are playing a significant and powerful role in Afghanistan. They have rolled back the Taliban from previous strongholds in the South. They are taking the fight to the enemy in some of the most grueling conditions imaginable.

RAZ: The division of labor among foreign troops in Afghanistan is somewhat complicated. Overall, it's a NATO-led stability operation. There are about 40,000 NATO-led troops there, and more than half of those troops are Americans serving under NATO's command. But then there are another 13,000 U.S. troops serving solely under U.S. command.

Over the past year, as security conditions in Afghanistan worsened, Pentagon officials began to grumble about NATO's commitment to the mission. There was -and is - a shortage of foreign troops there, so the Pentagon hoped NATO countries would fill that shortage. But internal political opposition in places, like Germany, Canada, even Britain, meant that NATO wouldn't be able to do that, so earlier this week, the Pentagon announced the U.S. would meet that shortfall and deploy another 3,200 Marines to the country.

And privately, some Pentagon officials hinted that the move underscored their belief that the United States was doing all the heavy lifting in Afghanistan. But Secretary Gates, now sensitive to NATO's hurt feelings, also shot down that idea.

Mr. GATES: This deployment of Marines does not reflect dissatisfaction about the military performance in Afghanistan of allied forces from other nations.

RAZ: So, bygones be bygones - or so Gates hopes - because in a few weeks, he'll face all those NATO defense chiefs at a summit in Eastern Europe. 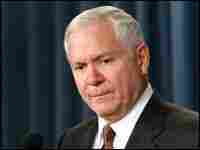 Defense Secretary Robert Gates says there are no plans to send more troops to Afghanistan beyond the roughly 3,000 Marines being deployed. Mark Wilson/Getty Images hide caption 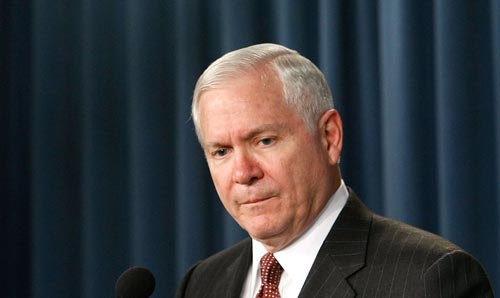 Defense Secretary Robert Gates says there are no plans to send more troops to Afghanistan beyond the roughly 3,000 Marines being deployed.

Robert Gates discusses U.S. military involvement in Iraq under the next administration.

Iran poses "significant challenges" but is not a direct military threat to the United States in the near term, Defense Secretary Robert Gates said in an NPR interview. Gates also said he has no plans to send more troops to Afghanistan beyond the recently announced deployment of about 3,000 Marines.

In an interview with Steve Inskeep, Gates discussed threats to American security and how he judges where U.S. forces need to be.

Inskeep: Is Iran the greatest threat that the United States is likely to face in the final year of this administration?

Gates: Well, I think Iran is certainly one of the most significant challenges. We continue to be concerned about their ongoing enrichment programs, their unwillingness to suspend in the face of broad international pressure to do so. So I think it will continue to be a challenge.

Is there a reason you describe them as a challenge rather than a threat?

You have commented on Iran's role in Afghanistan, which is the next country that I want to ask about. Do you expect that NATO, which is currently involved in combat operations in the southern part of the country, will have a significantly different role in Afghanistan one year from now?

No, I think the role will be very similar. And I think it's one that combines military action with economic development and civic action. Our NATO allies are playing a significant role, particularly Canada and the United Kingdom and the Dutch. This kind of role, even with the addition of our Marines will remain essentially the same.

Although you mentioned Canada — this is a country where the government is under a lot of domestic political pressure because of the casualties they have suffered. Are you concerned that if they remain in that exposed position, that you could end up losing an ally as opposed to perhaps putting them in a less-exposed area of the country?

My hope is that the addition of the Marines will provide the kind of help that will reduce the levels of casualties. Part of the problem that NATO confronts is that a number of governments are present in Afghanistan, but many of them are in minority or coalition governments where support for the activity in Afghanistan is fragile, if not difficult to come by. And one of the reasons why I decided to tone down the public criticism is that, frankly, I think they're doing as much as they can.

Should I understand you to mean that under ideal circumstances, you wouldn't have to be sending extra U.S. troops to Afghanistan right now, that NATO might be putting an extra 3,000 troops in there?

Well, I think certainly in the near term that's the case. We clearly had an unmet requirement from the NATO commander in Afghanistan. We are providing 2,200 Marines and we will partially satisfy the training requirement with another 1,000 Marines.

Is there a danger that as you try to reduce the strain on the U.S. armed forces by pulling some troops out of Iraq, if possible, over the coming months, that that's going to be canceled out, at least partly, by sending more troops to Afghanistan?

Well, we certainly don't have any plans to send further troops to Afghanistan beyond what we've just announced.

Well, the way I have structured this process is the same way that we did it last August and September. Gen. Petraeus will make his evaluations based solely on the situation in Iraq. Central Command will independently analyze the situation in Iraq, but also in the context of the region. The Joint Chiefs of Staff will do a third independent evaluation — not only taking into account Iraq, but also the region and also global pressures.

Now, it happened last fall all were agreed in supporting Gen. Petraeus's recommendations on what to do, so we'll go through that process again in February and March. And my hope is there will be agreement. If not, the president will be in a position to hear independently from each of those groups and make his own evaluation and decisions.

But aren't you going to hear from the military personnel about the need to reduce the operational tempo for the armed forces overall, which is a demand to bring troops out of Iraq, in effect, regardless of the situation?

Well, first of all, taking five brigade combat teams out of Iraq does relieve the pressure to some extent. And I think we are on a path where there is some reasonable chance that by next fall, units that are deploying will no longer have to have a 15-month deployment.

Do you think that by the time this administration leaves office in about a year that the military will be in a sustainable position?

Well, I think that withdrawal of the five brigade combat teams, we'll be in a sustainable position. I think that, as the drawdowns continue in Iraq, stress on the force will continue to be relieved.

You can debate, and people do debate in this building what that number is and I'm not going to get into those numbers. The goal here is to be in a position to have some modest-size force, considerably smaller than the one we have now for some years to come.

Well, given that, do you assume, just for planning purposes that the administration that follows you will pursue roughly the same policy in Iraq?

Well, first I would say I don't do politics – [chuckles] – and I certainly will not be here after Jan. 20, 2009. But I was heartened in the debate among the Democratic candidates a few weeks ago, that when asked if they would commit to having all U.S. troops out of Iraq by the end of their first term, the leading candidates all declined to make that commitment.

And my goal is to try and put the situation in Iraq in the best possible place for the next president so that we can have a sustained policy in Iraq. My whole experience is shaped by the Cold War where we followed a basic strategy that had bipartisan support through multiple presidencies. Iraq is a long-term problem.

Does your experience in the Cold War also inform some of your recent remarks about so-called soft power? You – I'll summarize – encouraged the United States to spend more money and effort on nonmilitary means of influence abroad: diplomacy, improving the U.S. image and so forth.

Absolutely. I mean, when the Cold War was at its height, the U.S. Agency for International Development had something like 16,000 employees. It has 3,000 now. One of the points that I make, if you took all Foreign Service officers in the world — about 6,600 — it would not be sufficient to man one carrier strike group. And right now, frankly, I think that the diplomacy, international economic assistance and so on have been significantly weakened.

Isn't there, though, a basic budget choice that someone is going to have to make though? Either you get six more fighter planes, for example, or you get a few thousand extra Foreign Service officers?

Well, the reality is that the cost of increasing your capabilities on the diplomatic, economic side, is really pretty modest. The entire State Department budget is $36 billion. We spend that in the Pentagon on health care.

Would you say it would be worth it to slow down the growth of the Defense Department budget to allow for greater diplomacy and other efforts?

Well, I don't think you'll every find a secretary of defense who will say it's a good idea to cut the Defense Department budget.