Accessibility links
Candidate Bingo: Is Bloomberg Running? It would seem there are a lot of presidential candidates, but that's not stopping a small group of independents from urging New York Mayor Michael Bloomberg to run. Bloomberg denies he's running for the top office, but is he acting like a candidate?

Think someone you know may be running for president? Print out our candidate Bingo card to find out! 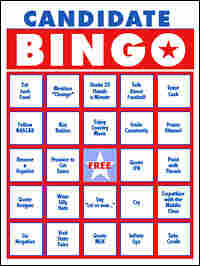 (To download, PC users: Right-click and select "save target as." Mac users: Control-click and "save link as.")

Bloomberg always answers no, and adds that he already has the best job in the world.

But that hasn't stopped his supporters and quite a few reporters from suspecting that he may have secret plans to run. He already has the billions of dollars of personal wealth. He certainly has the ambition, and there were reports this week that the mayor is doing polling in major states. But is Bloomberg showing the signs of really becoming a presidential candidate?

I decided to find out. I made up a BINGO card with all the attributes you see in candidates these days: an overwhelming desire to kiss babies and shake hands, the verbal tic of always mentioning "change" and the excessive quoting of John F. Kennedy, or Reagan, depending on your political bent. I followed Bloomberg around for the week and marked off the squares. And let's just say, I never yelled BINGO.

Mayor Bloomberg doesn't exude the populist touch. He didn't talk NASCAR or eat junk food. In fact, when faced with a buffet table of sweets, he opted for the pumpernickel bagel. Another big test was at the firefighter graduation. The room was filled with adorable babies. Adorable babies of firefighters. What politician could resist? Bloomberg didn't smooch a one of them.

Of course, 10 years ago, no one would have thought a man like Bloomberg could be mayor. New York City had a recent tradition of larger-than-life, controversial mayors. But it turns out that New Yorkers actually enjoy a calm, efficient manager to help make the city run smoothly.

Perhaps, after the longest presidential race in history, American voters might be willing to consider the same thing. If your BINGO card is full of the old politics, you might welcome someone who plays a different game.