Accessibility links
New Yellow Corn Could Boost Vitamin A, Save Sight Researchers have discovered some long-abandoned varieties of corn that contain higher levels of beta-carotene, which the body uses to make vitamin A. Wider use of this corn in the developing world could keep millions of people from going blind.

Listen
New Yellow Corn Could Boost Vitamin A, Save Sight 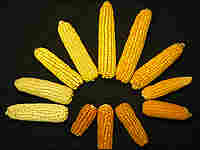 Corn comes in a variety of colors, including white, yellow and bright orange. Varieties with deeper colors often have higher levels of beta-carotene, a precursor to vitamin A — though color does not always determine how much of this nutrient is present. Scientists are testing corn to find the optimum level of beta-carotene. Science/AAAS hide caption 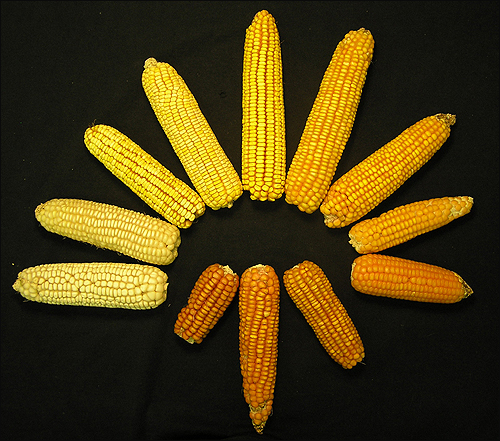 Corn comes in a variety of colors, including white, yellow and bright orange. Varieties with deeper colors often have higher levels of beta-carotene, a precursor to vitamin A - though color does not always determine how much of this nutrient is present. Scientists are testing corn to find the optimum level of beta-carotene.

Researchers have located long-forgotten varieties of corn with surprisingly high levels of vitamin A.

In parts of Africa and Latin America, where people rely heavily on corn for food, these new varieties of corn could keep millions of children from going blind.

But they're going to have to get used to corn of a different color — and that may not be easy. The problem: People in Latin American and Africa currently prefer white corn. The new varieties are yellow or orange.

Corn started out white when the very first varieties appeared in present-day Mexico thousands of years ago.

One of these carotenoids is beta carotene, which gives us vitamin A. So, yellow corn is a little bit more nutritious than white corn.

But Torbert Rocheford, a corn geneticist at the University of Illinois, says no one has paid much attention to those levels of beta-carotene until now.

"There were some measurements taken in the 1980s, but it was just some simple measurements, and nobody really cared," he says.

A global epidemic of vitamin A deficiency has changed that. According to the World Health Organization, 200,000 to 500,000 children go blind each year because they aren't getting enough of this vital nutrient.

There's now a global effort under way to boost vitamin A levels in the grains that people rely on most: rice, wheat and corn.

So Rocheford took on corn. Common yellow corn, widely grown today, doesn't have enough beta-carotene to make much of a difference. So Rocheford tested hundreds of old and abandoned varieties, drawn from every corner of corn's gene pool.

"These all had been used by breeders at some point in time during the last 70, 80years," he said.

He struck gold. Two of the varieties had beta-carotene levels 10 times higher than average.

There was more good news: A colleague at Cornell University traced the high levels of beta-carotene to a single gene. That makes it easier for breeders to move the gene into corn varieties that people already grow and eat. It won't involve controversial tools like genetic engineering.

Rocheford says he has been hoping for this for a decade.

"In some ways, I didn't think it would ever happen, because it was so far off. I hoped it would happen, and I knew it would happen, but it was just so far out there. So it's like a dream come true to get to the point where we find the genes."

But the last big hurdle isn't scientific, it's cultural.

Africans, for instance, generally prefer white corn, which has no vitamin A. One reason they don't like yellow corn is because it usually comes as food aid.

Alex Winter-Nelson, an economist at the University of Illinois, says the corn in food aid doesn't feel or taste quite right. So the color yellow "is sort of code for this texture, for quality issues, for a sense in the back of the mind that this corn was grown as animal feed and not as human food," he says.

The team at the University of Illinois hopes that Africans might still accept vitamin A corn as something new and different. The latest lines of this corn, which promise even higher levels of beta carotene, aren't yellow. They're orange.

Just over a year ago, Winter-Nelson and one of his graduate students took some of this orange corn to an open-air market in Mozambique for a taste test. The market-goers still preferred their white corn, but almost half of them agreed to exchange it for bags of orange corn when they heard it was more nutritious.

"So, the ones who need it were attracted to it."

Winter-Nelson says that's just one hopeful sign; not proof that orange corn will save lives.

But recently, a scientist from the one of the world's main corn-breeding centers in Mexico, visited the University of Illinois, making plans to get vitamin A corn to farmers around the world.

The report on vitamin A corn appeared in the journal Science.