Accessibility links
Latino Vote Focus of Nevada's Democratic Primary Hispanics in Nevada are poised to have a substantial say in choosing the Democratic presidential nominee. The Democratic Party is aggressively courting the community for caucus participants in Saturday's caucuses. Many of them are savoring the moment as a sign of political clout.

Hispanics in Nevada are poised to have a substantial say in choosing the Democratic presidential nominee. The Democratic Party is aggressively courting the community for caucus participants in Saturday's caucuses. Many of them are savoring the moment as a sign of political clout.

Democrats are focusing this weekend on Nevada. Diversity was one of the reasons the Democrats decided to put the Nevada caucuses in January for the first time, soon after Iowa and New Hampshire. And Nevada's population includes many Latinos; that's a big part of the diversity.

On the state level, the party has gone all out to register and educate the one-fifth of the voting-age population that's Latino, and the presidential candidates have courted them.

INA JAFFE: There are just a couple of days to go before the caucuses, and Marco Rauda is returning dozens and dozens of voicemails left on the Democratic Party's Spanish-language hotline.

JAFFE: Marco Rauda is a field organizer for the Nevada Democratic Party. And right now he's the guy with the answers to all the varied questions that Spanish-speaking voters have about the caucuses. There is some real excitement out there, he says.

Mr. RAUDA: It's the first time the Hispanic community could have a say on picking the next presidential nominee. It gets them excited to hear it on the news every day, so they definitely want to participate and want to be part of it.

JAFFE: Rauda sits in a cavernous hall surrounded by a couple dozen volunteers who have become one with their telephones. A number of them are Hispanic and will be first time caucus-goers themselves. Gladys Racino(ph) says Hispanics are savoring the attention.

Ms. GLADYS RACINO: We haven't had a candidate yet reach out to us, the Latino community, and this is the first time that they've really seen a level of access and a level of participation that they can connect to.

JAFFE: Connect to them right in their living rooms.

JAFFE: Latinos knew best Amiga Hillary has been advertising in Spanish here, and Senator Clinton has been sharing the airwaves with her chief opponent, Senator Barack Obama.

JAFFE: Hispanics have also gotten a lot of personal attention from the candidates and state assembly member Ruben Kihuen believes that's what it takes to be successful with Latino voters. He won his seat largely by going door to door and then writing personal thank you notes. He's backing Hillary Clinton, and he did some house-to-house canvassing with her in his district last week.

Mr. RUBEN KIHUEN (Nevada State Assembly): She went to a neighborhood that had never been reached out to by a candidate at a state level. And then here you have a presidential candidate, when they could be at a rally with 20,000 people, coming out to meet the constituents directly.

JAFFE: Clinton was also perhaps sticking it to the powerful Culinary Workers Union, the state's largest labor organization, which had the day before endorsed Obama. The union is about 40 percent Hispanic, and many of those members live in Ruben Kihuen's district.

But the increasingly bitter rivalry doesn't bother Kihuen as long as it gets Hispanics to caucus.

Mr. KIHUEN: So at the end of the day, we're both working towards the same cause, just for a different candidate.

JAFFE: The Culinary Workers Union has a legendary get-out-the-vote machine. It will double as a Latino outreach effort for the Obama campaign. A spokesman for the union refused NPR's request to see them in action. But they have 60,000 members, so it's not hard to find one.

Verona Colora(ph), a cashier at the Luxor Hotel, was waiting in line yesterday to hear Obama speak at Rancho High School in the heart of the Latino community. Yes, she said, she has been contacted by her union.

Ms. VERONA COLORA: They've been at the work and signing us up for the caucus on Saturday. So they've been really helpful.

JAFFE: And are you going to caucus?

JAFFE: Have you ever before?

JAFFE: There is no telling what the impact of Hispanics will be on Saturday because no one has any idea how many people will turn out in these first-time-ever January caucuses. But Democratic Party organizer Marco Rauda thinks all this work will pay off after Saturday.

Mr. RAUDA: Yeah, we're hoping that Nevada not only picks the next presidential nominee, but even the next Democratic president, and this is a great way to start.

JAFFE: Nevada has, in fact, voted for the winner in every presidential election but one. But this November it's likely that Hispanic voters will play a larger role in the outcome.

INSKEEP: Read more about the issues in Nevada at npr.org/elections.

What's at Stake in the Nevada Caucuses? 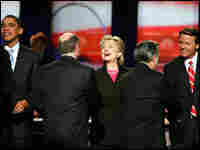 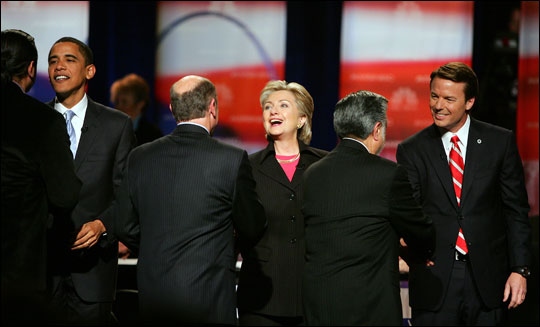 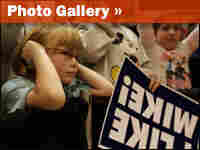 • Nevada is the first primary or caucus state with a sizable number of Hispanic voters.

• Only caucus-goers registered with a party can participate. Absentee ballots are not accepted. Nevada's caucuses will begin Saturday morning and are expected to last several hours.

• Nine hotels and casinos have been designated as Democratic caucus sites, in a move aimed at making it easier for casino workers to participate. The state Democratic Party let the culinary workers' union, which has endorsed Illinois Sen. Barack Obama, choose the sites. But that decision has been challenged in court by the state teacher's union, which argues that the sites unfairly favor Obama.

Nevada is the first Western state to hold caucuses for both parties, but Saturday's event has become more of a Democratic affair. Sens. Barack Obama (IL) and Hillary Clinton (NY) compete in the Silver State having each won a victory in an early voting contest. They, as well as former Sen. John Edwards (NC), are looking for a win in Nevada to give them a boost going into South Carolina and Super Tuesday.

Though Nevada Republicans are also caucusing that day, the GOP presidential candidates have largely chosen to focus their efforts in South Carolina, whose same-day primary has long been seen as determinative in the race for the Republican nomination.

Here's a guide to what's at stake for the candidates in Nevada's Jan. 19 caucuses, and the issues that will be on voters' minds.

What's at Stake: Clinton had a double-digit lead in the polls back in December, but Nevada's largest union of culinary workers (which has roughly 60,000 members) has endorsed Obama. A recent poll of 500 Democratic and Republican voters, sponsored by the Reno Gazette-Journal shows Clinton, Edwards and Obama in a statistical dead heat: Obama with 32 percent, Clinton with 30 percent and Edwards with 27 percent.

All of the candidates will fight over the Hispanic vote. Latinos make up 25 percent of the state's population, although only half of them can vote due to age or immigration status. The withdrawal of Gov. Bill Richardson (NM) from the race has only increased the remaining Democrats' efforts to woo Spanish-speaking voters. Nevada has hosted two Democratic debates, one in November and one on Jan. 15.

The Issues: As with most states, the Iraq war, immigration and the economy are major issues in Nevada. As a Western state, water, environmental and energy rights also come into play. Nevada has not been as hard-hit as other early-voting states, such as Michigan and South Carolina, in terms of unemployment — the booming casino businesses employs many residents — but it does have the highest rate of home foreclosures in the country.

What's at Stake: Unlike the Democrats, the Republican candidates have never expended much effort in the state. A poll sponsored by the Reno-Gazette Journal shows the GOP candidates locked in a close contest.