Accessibility links
Violinist Johnny Frigo on Piano Jazz Piano Jazz remembers the multi-talented jazz man Johnny Frigo. For most of his career, Frigo was known as an in-demand bass player and a prolific composer. In his 70s, Frigo re-emerged as one of the great jazz violinists. Hear an interview and performance with the premiere musician. 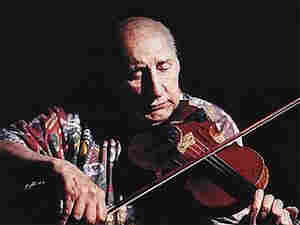 Violinist, bassist, singer, and songwriter Johnny Frigo was a true Renaissance man of jazz. Born in Chicago in 1916, Frigo began taking violin lessons when he was 7. After three years, his mother could no longer afford the cost of 25 cents a week, so Frigo was forced to give up musical training until junior high school.

Curtis Junior High had no orchestra, so he learned to play the tuba, an instrument no one else wanted to play. During this time, Frigo bought a trumpet and taught himself to play it as well. It wasn't until high school that he had a chance to join a school orchestra and finally play the instrument that was to provide his livelihood for decades to come: the string bass.

During high school, Frigo joined the Al Diehm Orchestra, as a singer and bass player. After graduating, he joined Vic Abbs and the Four Californians, playing and singing on various radio broadcasts. In 1942, he became part of the Chico Marx Theater Touring Orchestra, where he had a chance to show the full range of his talents, playing violin for a comedy bit with Marx and singing in a vocal quartet that included a 17-year-old Mel Torme.

After World War II and a stint in the Coast Guard, Frigo hit the road as bassist for Jimmy Dorsey's Orchestra. He later left Dorsey while the group was in New York to form a trio along with guitarist Herb Ellis and pianist Lou Carter. The group called itself The Soft Winds. It was during this time, around 1947, that he wrote the now classic song "Detour Ahead" and (with Carter and Ellis) "I Told You I Love You, Now Get Out!"

In the late '40s, Johnny Frigo moved back to Chicago where he spent most of the next 25 years working as a session bass player and playing a regular gig at Mr. Kelley's with pianist Dick Marx. At the end of this period, Frigo moved to Los Angeles. There he backed Billie Holiday, Barbara Streisand, Woody Allen and Lenny Bruce, among others. He also married Brittney Browne and helped foster her as a singer.

During the '70s, Frigo began practicing the violin again and began taking gigs anonymously in order to work up his chops. By the mid-'80s, he was sitting in with jazz players whenever he could, including a trio of Monty Alexander, Ray Brown and Herb Ellis. They were so impressed with his playing that they invited him to feature on their next two Concord Records albums. An article by Leonard Feather in the Los Angeles Times led to an appearance on the Tonight Show with Johnny Carson, where he was asked why he had started his new career as a jazz violinist at such an advanced age. (He was 72 at the time.) Frigo replied that he supposed he'd "waited as long as possible so I wouldn't have any time left to become a has-been."