Accessibility links
The Sounds of Finnish Musical Experiments In the 20th century, Finland became a progressive, cutting-edge technological society. Its music, though little-known, followed suit: Relentlessly innovative, much of today's best music from Finland pushes the past firmly into the future.

Links to MySpace pages for the artists mentioned in the report: 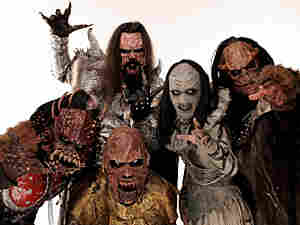 L- Less than a century ago, composer Jean Sibelius was writing music that reflected Finland as it gained its independence from Russia.

Since then, the country has grown to be a progressive, cutting-edge technological society. Beyond Sibelius, though, Finnish music still isn't well known, but there's a lot going on, with a restless, experimental attitude.

But it's not as strange as it seems. Hard rock and metal have been Finland's most successful music export in recent years. From Hanoi Rocks in the 1980s to Children of Bodom, HIM and the cello-driven Apocalyptica, Finnish metal has made an international name for itself.

But Finland is a country that likes rock in all its forms, as the charts reflect, although the bands do sing in the international language of English. Even the so-called alternative bands heavily blur the lines between rock and pop.

The trio 22-Pistepirkko are the perfect example. They've been fixtures on the Finnish music scene for 25 years, consistently on the charts with an open, slightly psychedelic sound that ultimately doesn't fall into any camp.

But it's not just older bands who think outside the box. Younger artists, too, are merging rock with other styles. The curiously named, four-member Don Johnson Big Band played mix 'n' match with several genres from dub to country on their self-titled, platinum-selling album (platinum in Finland being 30,000 copies). On "Road" they've hit on an interesting, melodic fusion of rock and hip-hop.

That kind of quirkiness is quite typical of Finnish music. It was already there back in the 1970s, when the country produced a widely respected crop of progressive rock musicians. Among the leaders of the pack were Wigwam, led by Irish singer and keyboard player Jim Pembroke. The band laced its music with a heavy dose of good humor to complement the intricate musicianship, but could never move beyond cult status internationally.

Wigwam still perform and record. So does their former bass player, Pekka Pohjola, although these days he's found a home in the country's growing jazz scene. So has his son, trumpeter Verneri Pohjola, who is part of the Ilmiliekki Quartet. Like many others in Finnish jazz, the band uses the music as a jumping-off point into experimentation that can range from the raucous to the moodily introspective.

Finnish heavy metal has a global reputation, but more recently Finnish folk music has been snapping its heels on the international stage. In part, credit must go to the folk music program at the Sibelius Academy. For more than 20 years, it has allowed a couple of generations of young musicians to develop and hone their skills.

Beyond any doubt, the brightest stars to emerge from the Finnish folk scene are the female-led Varttina. The band has grown from naive teenagers singing regional music into a skilled, groundbreaking outfit. They've been unafraid to play with their keening vocal sound and take it in unexpected directions. Most recently they composed the music for the extravaganza stage musical version of Lord of the Rings.

And they're not the only act to make inroads outside their homeland. Wimme, a member of the nomadic Sami, or Lapp, people, has made an art form of their joik singing style. Traditionally sung unaccompanied, joiks are short, impressionistic songs intended to convey the essence of a place or person. Wimme has revolutionized the style by blending the joik with electronic soundscapes, making it accessible to a much wider audience.

If there's a single thread running through Finnish music, it's a willingness to subvert norms. Whether it's the comic book theatricality of Lordi or the iconoclasm of Wimme, artists move naturally and easily outside established frameworks. In this relentless experimentation, they take the past and push it very firmly forward to the future.