Accessibility links
Fischer Inspired Chess Boom in Pop Culture Chess grandmaster Bobby Fischer was a full-on celebrity after defeating Boris Spassky in 1972. His disappearance from public view in 1975 made him all the more mysterious. Fischer inspired books and movies and, in the 1980s, a musical.

Chess grandmaster Bobby Fischer was a full-on celebrity after defeating Boris Spassky in 1972. His disappearance from public view in 1975 made him all the more mysterious. Fischer inspired books and movies and, in the 1980s, a musical.

Bobby Fischer may be a dubious hero, but after beating Boris Spassky in 1972, he was America's first and only chess celebrity. He was on the cover of Life and Sports Illustrated. The United States Chess Federation underwent a Fischer boom and membership doubled in one year, and his fame extended beyond to the world of chess.

SIEGEL: Even after he vanished from public view, Bobby Fischer's mystique persisted for decades. He was the subject of several books, and he even inspired a musical.

Unidentified Man: (Singing) Bangkok, Oriental setting. And the city don't know what the city is getting. The creme de la creme of the chess world in a show with everything but Yul Brynner.

SIEGEL: The musical "Chess" had numerous incarnations. It began as a concept album. And this song, "One Night in Bangkok," shot up the charts. In 1985, one version reached number three on the Billboard Hot 100. The musical featured a chess rivalry between an American and a Russian, a love triangle, and a backdrop of the Cold War. One of the leads was loosely based on Fischer. In addition to playing chess, he has a weakness for international night life.

Unidentified Group: (Singing) One night in Bangkok and the world's your oyster, the bars are temples but the pearls ain't free.

SIEGEL: The show eventually made its way to Broadway in 1988, not very successfully. Frank Richard's review in The New York Times offered this: The evening has the theatrical consistency of quicksand.

But "Chess: The Musical" still has a following with revivals popping up here and there, a musical legacy of a troubled man.

Unidentified Group: (Singing) One night in Bangkok makes a hard man humble. Not much between despair and ecstasy.

You can find a photo gallery of Bobby Fischer's life since his days as a teenage chess sensation at npr.org. 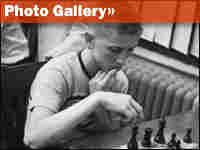 Fischer, 64, became a Cold War icon in 1972 when he outmaneuvered the Soviet Union's Boris Spassky to become world chess champion.

Born Robert James Fischer in Chicago, Fisher was raised in Brooklyn, N.Y. He became a U.S. chess champion at 14 and a grand master at 15. He beat Spassky in a series of games in Reykjavik, Iceland, to claim America's first world chess championship in more than a century.

The event had great symbolic importance, pitting the young American against a product of the grim and soulless Soviet Union.

It also was marked by Fischer's odd behavior — possibly calculated psychological warfare against Spassky — that ranged from arriving two days late to complaining about the lighting, TV cameras, the spectators, even the shine on the table.

Former Russian chess champion Garry Kasparov said Fischer's conquest of the chess world in the 1960s was "a revolutionary breakthrough" for the game.

But Fischer's reputation as a chess genius soon was eclipsed by his idiosyncrasies. He lost his world title in 1975 after refusing to defend it against Anatoly Karpov. He dropped out of competitive chess and largely out of view.

Fischer lived in secret outside the United States but emerged in 1992 to confront Spassky again, in a highly publicized match in Yugoslavia. He beat Spassky 10-5 to win $3.35 million.

He was arrested in Japan in July 2004 and threatened with extradition to the United States to face charges for violating the sanctions. He spent nine months in custody before the dispute was resolved when Iceland — a chess-mad nation and site of his greatest triumph — granted him citizenship.

Although his mother was Jewish, Fischer became increasingly anti-Semitic and anti-American. After the Sept. 11, 2001, terrorist attacks, Fisher said the U.S. should be "wiped out."

Fischer died in a hospital in Reykjavik, his spokesman, Gardar Sverrisson, said. There was no immediate word on the cause of death.