Accessibility links
Eve Harrington: The Bad Girl, Hollywood Style Said real-life actress Celeste Holm about fictional actress Eve Harrington: "She had the manners of an ambassador and the morals of a pirate." All About Eve's antiheroine is all sweet-talking ambition, Mother Eve as ruthless ingenue. 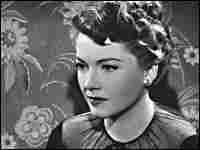 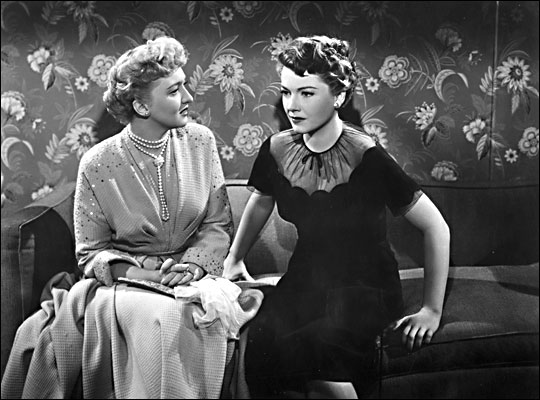 Ruthless people: Anne Baxter plays Eve Harrington in the 1950 classic All About Eve; Celeste Holm (left) is Karen Richards, a friend she uses on her way to the top.

'All About Eve' Clips

'When the Show Went East, I Went East'

'I'd Do Much More for a Part that Good.'

Said the real-life actress Celeste Holm, once upon a time, about the fictional actress Eve Harrington: "She had the manners of an ambassador and the morals of a pirate."

Eve — proximate cause of one of the most famous lines in movies: "Fasten your seatbelts — it's going to be a bumpy night."

Sweet, mousy, worshipful Eve — the ever-so-helpful assistant to Broadway star Margo Channing in the fasten-your-seatbelts movie classic All About Eve — turns out to be duplicitous, deceitful, two-faced. She wants everything Margo has: her career, her lover, her place on the marquee. Eve Harrington will do anything to get what she wants. And, says movie writer Sam Staggs, she "damn well near succeeds."

In his book All About 'All About Eve', Staggs reports that the film was based on a story called "The Wisdom of Eve," published in Cosmopolitan in 1946.

In the magazine version, Eve Harrington never gets punished; she spies on a star, steals a husband, and gets away with it. In the movie, Eve gets the stardom, the awards — but it's clear her heart is hollow, her life empty. And she has her own Eve waiting in the wings.

Why the difference? Staggs says Hollywood was Censorship Central in those days.

"Not only were sex scenes censored, and scenes of violence," Staggs says. "There was a censorship for morality; people who did bad things had to be punished at the end of the picture."

Staggs sees All About Eve as an indictment, a suggestion from writer-director Joseph Mankiewicz that show business survives on bloodsuckers like Eve.

'A Hunger for Recognition'

Actress Stockard Channing disagrees. A few years ago, she played Margo in a benefit reading of the screenplay. (Calista Flockhart was the Eve.) Channing thinks that in any world, on or off the stage, a sinner like Eve would be punished for her treachery. It's the "hidden aspect" of Eve's scheming, "the fact that she would simper and hide things," that makes her so repulsive, in Channing's view.

"I've seen glimmers of incredible ambition — yes, I have seen that," Margulies says. "A kind of voraciousness, and a hunger for recognition."

And in his 1998 play Collected Stories, Margulies created an Eve-like character — a young graduate student working with a venerated author. Over the years, Lisa Morrison (the student) and Ruth Steiner (the writer) become close friends. Ruth pours her heart out to Lisa — who then uses Ruth's most private experiences to create a highly successful first novel.

"It's my life," roars Ruth in a passionate confrontation after the novel is published. "You appropriated my life."

Love, Fear and Other Basic Instincts

The story of Ruth and Lisa, Margo and Eve is the story of star and disciple, mentor and apprentice — even parent and child. Of age superseded and, yes, threatened by youth. Wanting to be kind, to teach, to give — but not everything. Not all of it.

Such a complicated relationship, riddled with love, desire, fear. And ego. And when the younger person, the Eve Harrington, is an unbridled rhymes-with-witch — but cloaks it in sugar — you end up with a classic Bad Girl.

Why do Bad Girls fascinate us so?

"I think," says writer Sam Staggs, "because bad girls — and bad boys — act out our basest instincts, [which] we try to suppress. That our superegos work overtime to suppress."

Eve, on the other hand, thrusts out one hip, writhing an arm above her head toward the apples, looking right at us through slightly lowered lids — the picture of seduction. She's Eve as in evil, Eve the corrupting femme fatale.

No accident, then, that Miss Harrington, the ambitious heroine of that 1950 Best Picture, shares the Biblical first woman's first name. 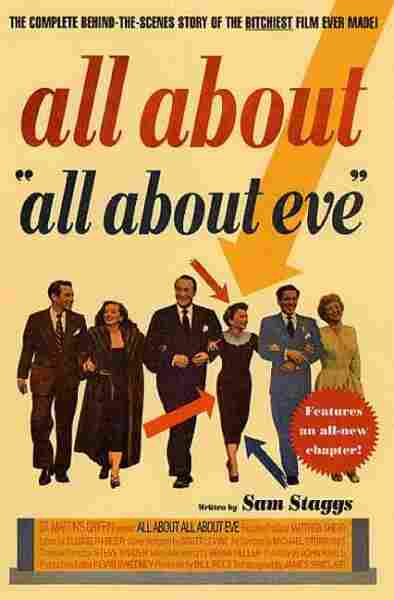 The Complete Behind-the-scenes Story of the Bitchiest Film Ever Made!

Title
All About All About Eve
Subtitle
The Complete Behind-the-scenes Story of the Bitchiest Film Ever Made!
Author
Sam Staggs