Accessibility links
'American Teen' Scores Big at Sundance Perched at the edge of adulthood and independence, the four high school seniors in American Teen struggle with universal conflicts and questions. Documentary producer and director Nanette Burstein paints an uncommonly intimate portrait of their lives — one that's wining hearts at the Sundance Film Festival. 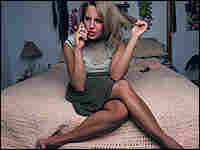 With a documentary following four kids in small-town Indiana, Nannette Burstein is winning hearts at the Sundance Film Festival.

Burstein's credits include The Kid Stays in the Picture, and now she turns her attention to the precarious perch on the threshold of adulthood that is your senior year in high school.

The result is American Teen, a movie some are calling the first real hit of the 2008 Sundance Film Festival.

"I knew that I wanted to tell a story about being 17," says Burstein, who produces and directs the film. She says she interview kids in 10 schools before settling on one in Indiana.

American Teen paints an uncommonly intimate portrait of people in their late teens. Burstein says the conflicts and issues haven't changed much since she was in high school. Sure, technology lets nasty rumors spread much more rapidly, but the consequences are much the same. "There are a lot of times when I put the camera down in the middle of something and just talked to them," she says. "I became like a big sister."