Accessibility links
GOP's Giuliani Hopes for a Breakthrough in Florida Florida is next on the Republican presidential program, and all of the big names are arriving ahead of the vote a week from Tuesday. But one major GOP contender has been working the state all month, counting on a breakthrough there to overcome the influence of the early contests: former New York Mayor Rudolph Giuliani.

Listen
GOP's Giuliani Hopes for a Breakthrough in Florida

Florida is next on the Republican presidential program, and all of the big names are arriving ahead of the vote a week from Tuesday. But one major GOP contender has been working the state all month, counting on a breakthrough there to overcome the influence of the early contests: former New York Mayor Rudolph Giuliani.

The presidential campaign continues today in the southeast. The next big stop for Republican hopefuls is Florida which holds its primary next week. The race there is pretty much a four-way tie.

And what sets Florida apart from all the contest to date is that it's the first place former New York City Mayor Rudy Giuliani is playing to win. His strategy has been to run a minimal campaign in the earliest states, focusing on a breakthrough in Florida.

DON GONYEA: It's something we've not seen in Iowa or New Hampshire or anywhere else for that matter - a Rudy Giuliani bus tour with the candidate attending rally after rally from morning to night.

Unidentified Man #1: Come on up, Rudy. Come on up here.

RUDY GIULIANI: Thank you very much. Thank you.

GONYEA: This is Giuliani in the Florida city of Celebration, a community built by Disney and located not far from Disney World. It wasn't a massive rally. It was held in the atrium of a building at Stetson University, and about 300 people were packed in pretty tightly. The candidate made it clear right at the top of his speech that a lot is at stake here.

GIULIANI: You're going to make sure that Florida really counts in this election, aren't you?

(SOUNDBITE OF CHEERS AND APPLAUSE)

GIULIANI: Florida counts and I'm counting on Florida - both ways.

GONYEA: Giuliani made his reputation as mayor of New York, most significantly on September 11th, 2001. And Florida has lots of retirees from that region. But his stump speech this week focuses first on his plans for the economy, noting huge, new concerns on that score. He describes himself as the only Republican candidate with a proven record of cutting taxes. Then, about three quarters on the way into his remarks, he switched his topics.

GIULIANI: Most important thing of all is our national security. We...

GIULIANI: ...and I believe that I would be the best to keep our country on offense against Islamic terrorism.

GONYEA: Giuliani said the Democrats seem to want to switch to a defensive posture in fighting terrorists by advocating withdrawal from Iraq.

GIULIANI: Our goal in Iraq - plain and simple - should be victory in Iraq.

(SOUNDBITE OF CHEERS AND APPLAUSE)

GIULIANI: And our goal with Iran has to be an Iran that is not a nuclear power - no how, no way. And we have to finish the job in Afghanistan and make sure that we have defeated al-Qaida, the Taliban, and that we catch bin Laden.

GONYEA: In the crowd, Giuliani supporter Tom Dall(ph) watches and nods. A 62- year-old retiree from Virginia, Dall is impressed.

TOM DALL: And every time I hear the guy address complicated issues, he has the ability to take a complicated issue, simplify, get to its core, and I don't care whether it's about immigration or Social Security or, you know, world or world economy. The guy is a smart dude.

GONYEA: Standing not far away in the back of the room was fourth year med student Tim Elder(ph) who lives in Celebration. He's undecided on who he'll vote for, but Elder does say he questions Giuliani's strategy to lay low in the early estates, focusing so much on Florida.

TIM ELDER: I don't know, it's definitely risky. I mean, he hasn't been making himself known in the - where the media coverage has been. He's been in Florida, away from it all.

GONYEA: Of course, not all that coverage is coming to Florida, and Giuliani is, once again, in the media mix. But suddenly, all of the other candidates are here as well. Polls show four of them tightly bunched together with John McCain using the bounce he got in New Hampshire and South Carolina to wipe out what was once a solid Giuliani lead in the state. 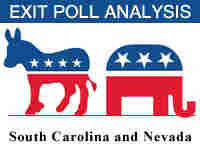 How They Won: Poll Results and Analysis

South Carolina's first-in-the-South primary is considered pivotal for both parties. For Democrats, next Saturday's contest is the first time they will see a significant African-American vote. For the Republicans, it's a historical bellwether: Since 1980, the winner of the GOP primary has always gone on to win the nomination.

Exit polls show seven in 10 voters in the primary described themselves as conservatives. More than half of them were religious conservatives, and Huckabee led among that group; however, other candidates, such as former Tennessee Sen. Fred Thompson, siphoned off some of Huckabee's base.

McCain had the advantage with veterans, who accounted for one in four Republican voters. He also did well among moderate Republicans and independent voters.

However, McCain won't be able to count on a boost from independents in Florida, where the Republicans are now focusing their efforts ahead of its Jan. 29 primary. Only registered Republicans can vote in that primary.

Meanwhile, the Democrats are gearing up for a fight in South Carolina this week. The candidates will debate in Myrtle Beach on Monday night.

Debbie Elliott talks to Andrea Seabrook from the campaign trail.