Accessibility links
Loving 'Leonore': Beethoven's Neglected Opera What would you do for your sweetheart? Climb the highest mountain; swim the deepest sea? How about infiltrating a Spanish prison and impersonating a member of the opposite sex? That's the story behind Beethoven's Leonore. Hear excerpts in concert. 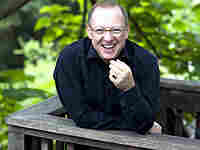 Conductor Nicholas McGegan is a fan of Beethoven's opera Leonore — an earlier version of his only opera, Fidelio. McGegan is an artistic partner with the St. Paul Chamber Orchestra. Randy Beach hide caption 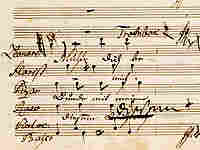 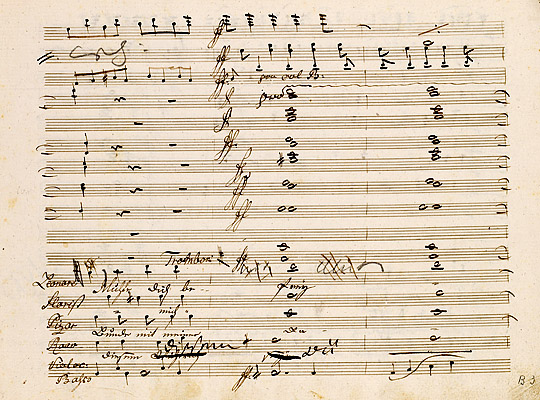 A page from Beethoven's working manuscript for the opera Fidelio. 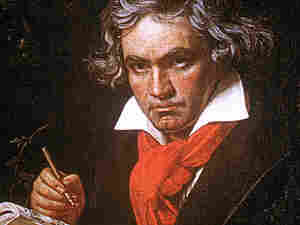 Beethoven reworked his only opera, Fidelio, over a period of 10 years, and in the process composed four separate overtures for it. (Portrait by Joseph Karl Stieler, 1820) Getty Images hide caption

It's widely known that Beethoven wrote only one opera. But some experts would beg to differ.

Beethoven's Fidelio premiered with great success in Vienna, on May 23, 1814. But Beethoven had been fine-tuning Fidelio for nearly 10 years.

At its debut in 1805, Beethoven's opera was called Leonore, and it flopped. There was a slightly different take on the basic plot, fueled by quite a bit more music than the Fidelio that came later.

For ages, Leonore was viewed as little more than a flawed first draft of Fidelio. But over the last decade or two, interest in Beethoven's earlier version has increased, even resulting in several recordings.

Some conductors who have taken interest in Leonore, like Nicholas McGegan (who conducts this concert), feel that the emotional content of Beethoven's earlier version is more pure, intense and immediate.

The opera is imbued with Beethoven's vision of freedom from political oppression, sparked by the ideals of the French Revolution. One writer described it as the story of "a woman, disguised as a prison worker, who liberates her husband, and strikes a blow for freedom, feminism, and prison reform."

For a brief period, Beethoven saw Napoleon as a champion for human rights, fighting against the old aristocratic order. But by 1805, Napoleon had invaded Austria and Beethoven had reversed his opinion. Some of that white-hot emotion, scholars say, found its way into Leonore, but was toned down later in Fidelio, as Beethoven's hopes had become diluted.

With all the agonizing Beethoven went through over his opera, one would hope that he would have come to a final acceptance. But he was never really happy. Just before the debut of Fidelio in 1814, he admitted to a colleague that he was "dissatisfied with most of it."

Fortunately for us, Beethoven was fussy. As a result of 10 years of re-tooling, he composed four separate overtures for his opera, known as Leonore No. 1, Leonore No. 2, Leonore No. 3, and Fidelio.

McGegan begins this concert with the first Leonore Overture, then moves on to a duet between the characters Leonore (disguised as a man) and Marcellina (the jailer's daughter who has a crush on Leonore). Next, there's a small march, and finally the recognition scene—a duet between Leonore and her husband, Florestan, whom she has rescued from the depths of the Spanish prison.