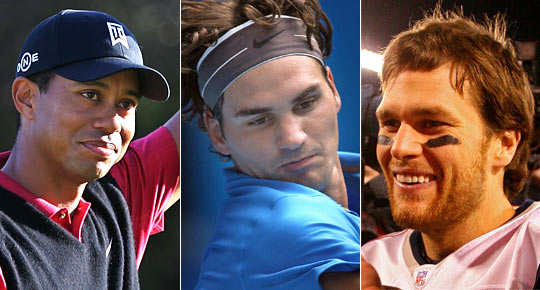 Ours is a youth-centric culture and nobody is supposed to care about history anymore. But curiously, it's really quite amazing the attention that sports fans pay to legacy, to how their favorite has-beens rank for posterity. History is history, except for sports. And, with fans, the present is always playing the past. Mirror, mirror on the wall, who's the fairest of them all ... all-time?

All this is underscored at this moment because we find an absolute glut of brilliance. Is it possible that right now we have, plying their genius before our admiring eyes, yea, verily, at their peaks, the greatest professional football team ever, the greatest quarterback ever, the greatest tennis player ever and the greatest golfer ever?

Of course, part of the mania to designate superiority in sports is because sports are, after all, competitive. But it is also true that it is an article of sporting faith that athletes are always getting better. In no other area do we believe this. The greatest writers and composers and painters are all long dead — they don't make 'em like they used to. But inasmuch as the cliche tells us that records are made to be broken, then it follows for many that the record-breakers are bound to be better than all the erstwhile record holders of the past.

Only right now the empirical evidence suggests that maybe that sophistry really is so, that the New England Patriots are the best team ever put on God's green grass, and Tom Brady is better even than Johnny Unitas and Joe Montana, and Roger Federer and Tiger Woods have surely come down from Mount Olympus to toy with the poor mortals who would dare take them on.

Because heroes in individual sports are not dragged down by imperfect teammates, it's easiest to rate the likes of Woods and Federer. Since the preponderance of opinion now is that they both are indeed better than anybody who's ever picked up a club or a racket, since that's settled, the new parlor game is to argue: Is Federer more dominant at tennis than Woods is at golf?

It's impossible to choose, though, because the challenges in the two sports are so different. Woods can have a bad day and survive, but he can't stop some other golfer, otherwise a non-entity, like Zach Johnson, at the Masters last year, from getting hot and beating him without ever really playing him directly head-to-head.

Federer has to play only one man at a time, so he controls his own fate better, but also, unlike golf, there are no off-days he can recover from; one bad match and he's gone from the tournament. In the Australian Open the other day, in fact, Federer almost got taken down by tennis' own version of Zach Johnson.

Down under, Federer's seeking his 11th straight Grand Slam final. That's simply impossible. Even as I sit here and say those words, I think: He must get beat. Must. And Tiger can't possibly beat all the world's best golfers at all four majors. And surely it's only the law of averages for Brady to have an absolutely rotten day in the Super Bowl. And the Patriots are ripe to be upset.

But no, no, no and no. Sometimes, I guess, they don't make 'em like they used to because, in fact, they make 'em even better.