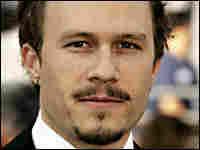 Heath Ledger at the 78th Academy Awards, the year he was nominated for his role in Brokeback Mountain. Jeff Haynes/AFP/Getty hide caption

Australian actor Heath Ledger, whose role as a tormented gay ranch hand in Brokeback Mountain earned him an Oscar nomination two years ago, was found dead Tuesday in his New York apartment. Police say drugs might have been involved. Ledger, 28, has a 2-year-old daughter with actress Michelle Williams.

He was just another teen heartthrob when U.S. audiences met him nine years ago, after he became something of a local success in Australia as — well, a teen heartthrob.

His first Hollywood film was the comedy 10 Things I Hate About You, based on Shakespeare's Taming of the Shrew, and his Petruchio-like Patrick wooed Julia Stiles' shrewish Kat in a persuasively contemporary way.

When the film hit, Ledger seemed on the road to a career as one of Hollywood's pretty boys — handsome, strapping, with a striking voice, perhaps, but otherwise unremarkable. But he turned down the teen flicks that came his way to appear in roles that cast him in a more substantial light.

His diverse roles included a suicidal son in Monster's Ball, a comic servant who impersonates a knight in the comedy A Knight's Tale, a gung-ho soldier in the Revolutionary War drama The Patriot and the mentor to a skateboarding team, who ends up stoned and out of it in Lords of Dogtown.

So the quality of his acting wasn't a surprise when he played the role that won him an Oscar nomination — taciturn gay ranch hand, Ennis Del Mar.

A few weeks after playing this tormented gay character, Ledger was showing his versatility again — as the world's most famous ladies' man, Casanova. It was a comedy — not really his strong point.

But he had only made a few comedies. His last we haven't seen yet. After lending his sad eyes and lanky frame this year to playing a Bob Dylan-like character in I'm Not There, Ledger worked in his first big-budget franchise film — the latest Batman movie, The Dark Knight.

When it comes out in July, he'll be featured as a younger, handsomer, Joker — a part originated by Jack Nicholson. A stretch once again for Ledger, who made stretching a point of style.