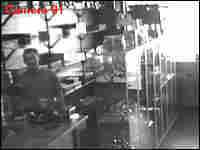 The hit TV show America's Most Wanted has long been a mainstay of participatory justice. Viewers offer authorities tips and have a hand in bringing a criminal case to a close. Now video-sharing Web sites are blowing prospects for interactive crime fighting wide open.

Cigar shop owner Bob Guertin saw this potential. Although the Big Sticks Cigar Shop in Mesa, Ariz., seems like your average store, it has an unusually high-quality video system. The camera recently caught a thief and his accomplice clumsily grabbing two expensive Seiko watches from the display case.

After filing a police report, Guertin handed out fliers with the suspects' pictures and posted the surveillance tape on YouTube in hopes of "making (the thief) famous, embarrassing him, maybe even getting him to turn himself in," he says.

Guertin offered a $1,000 reward to encourage tips about the theft. Since posted, the shoplifter video has been viewed more than 30,000 times.

Police caught the thief late last month after the watches were spotted in a pawn shop down the street from Big Sticks. It's not clear what effect YouTube had in the case being solved, but Guertin's video highlights a new form of cyber vigilantism.

"I do think there's a trend of seeking a form of distributed justice," says John Palfrey, executive director of the Berkman Center for Internet and Society at Harvard Law School. He says the Internet has made Web users part of a distributed justice system, where many users act as judge and jury in cyber space.

"It provides an avenue to get more information about who may have done this thing — and a higher chance in their view of bringing that person to justice," he says.

There is enormous power in being able to spread information over the Internet, Palfrey says, but if someone is falsely accused or defamed, there needs to be due process.

"I think we need to remember that checks and balances are needed in a law enforcement system and make sure those are built into any widespread form of distributed justice," he says.

Even without checks and balances, the handful of crime videos that have made it to YouTube seem to be popular.

Their popularity may be related to their novelty, says Steve Corman, a communications professor at Arizona State University.

"If it really got to be a popular thing and there were thousands and thousands of these videos out there, it's a little hard to imagine people sitting there all day looking at crime clips on YouTube," he says.

For now, though, users are definitely interested. Crime videos often draw thousands of views. It doesn't hurt that daily traffic to video sites such as YouTube has doubled in the past year, according to the Pew Internet & American Life Project.

Guertin says he's still a believer in the crime-fighting potential of the Internet. Should shoplifters strike again, they can be sure to find themselves on YouTube.