Accessibility links
Many Sderot Residents Suffer Trauma from Rockets Sderot is less than a mile from the Gaza border, and it's the most frequent target of rocket attacks by Palestinian militant groups. Thousands of residents have fled the town and many businesses have closed. Israeli psychologists say many Sderot residents are suffering from trauma. 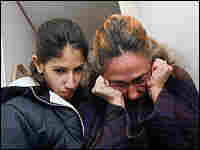 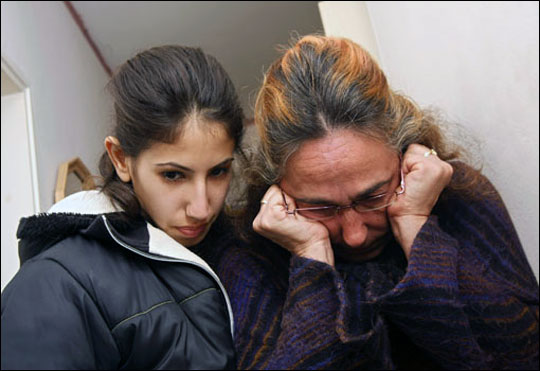 Traumatized Sderot resident Chava Gad and her daughter, Shai, take shelter in their hallway during a Kassem rocket attack, Jan. 22, 2008. 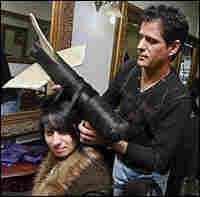 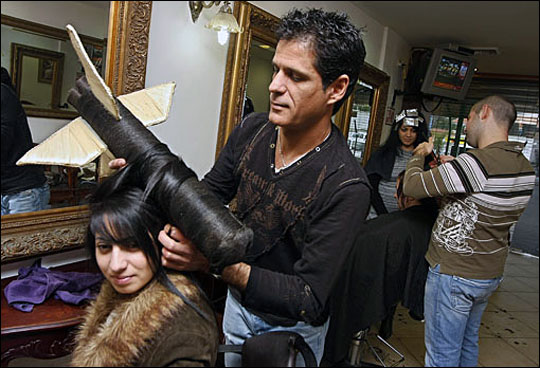 The Israeli blockade of Gaza, as well as frequent military operations in the territory, are aimed at stopping rocket attacks into southern Israel by Palestinian militant groups. The most frequent target of those attacks is the town of Sderot, less than a mile from the Gaza border.

Thousands of residents have fled the town and many businesses have closed. Israeli psychologists say many Sderot residents are suffering from trauma.

The daily Kassem rocket fire has taken over Chava Gad's life. She says she used to be an efficient, upbeat person who managed a local office. But she hasn't worked in two years and can't concentrate long enough to even fold a load of laundry.

Sitting in her small living room, she panics when an alarm signals an incoming rocket. Gad rushes to the hallway at the back of the apartment and cowers, her hands over her face. Her 16-year-old daughter, Shai, tries to calm her down.

When the alert is over in less than a minute's time, Gad returns to the living room. She opens her purse and swallows a valium. She says the tranquilizers are her only way of coping.

"The last month it was worse, more rockets …and the rocket with more explosives," Gad says. "So they give me more tablets. If I was taking three different tablets, now I take five, or sometimes six."

Last week alone, more than 200 Kassem rockets were fired from Gaza, many of them landing in or around Sderot. The crude, homemade rockets are notoriously inaccurate. But Gad says her 9-year-old son, Yanai, is terrified anyway.

"Last Thursday, I take him to the trauma center because the rocket fall 50 meter from here, and all the house was shaking, and he start to be breathless and shaking and not able to stop," Gad says.

For more than two years, she says, her son has insisted on sleeping in his parents' room, and he has become a chronic bed wetter.

Yanai's school is only a few hundred yards away, but Gad walks him to and from school, staying close to the buildings in case there's an alert.

As they walk home, Yanai tells his mother that the latest Kassem alert came when he was in the bathroom and he didn't know what to do. There's never much time. Because Sderot is so close to Gaza, the incoming rockets land within 15 seconds of the alarm.

At Sderot's open-air fruit and vegetable market, Benny Yakubu says business is way down. He blames the Israeli government for not doing enough to stop the rocket fire.

"Israel gives the Palestinians in Gaza electricity, gas and food. Why are they doing that? They should cut everything off until the rockets stop. Our government is useless," Yakubu says.

Three years ago, before Israel's withdrawal from Gaza, there were 24,000 Israelis living in Sderot. The municipality doesn't have exact figures, but residents say that only about 18,000 remain.

Last year, more than 2,000 rockets landed in Sderot and the surrounding area. Two Israelis were killed and dozens were wounded.

Some here try to find humor in the rocket attacks. Shimon Buskila, a hairdresser, has invented a Kassem hairdo. It's a model of a Kassem made out of synthetic hair that can be attached to a customer's real hair. He's put a poster of it on the salon's front door.

"We can't go on like this. Either sign a peace deal, or go into Gaza and get rid of the people who launch rockets," Buskila says.

Buskila recently spent almost $20,000 to build a reinforced room in his home to protect against rocket attacks. Last week, he says, a rocket bounced off his roof and crashed into his backyard.

Luckily, he says, it didn't explode.