Accessibility links
John Jorgenson: Preserving Django Reinhardt Jorgenson's fingers are nothing but a blur when he's notes-deep into a song on his unique guitar. The veteran gypsy-jazz guitarist has performed with Elton John, Bob Dylan and Sting, and was a member of the hit-making Desert Rose Band. 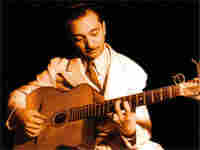 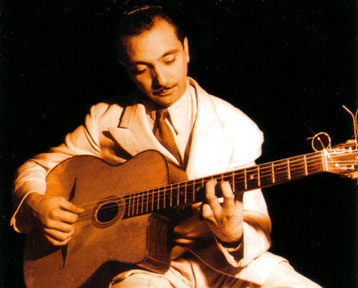 Django Reinhardt with his favored instrument, the Selmer guitar. 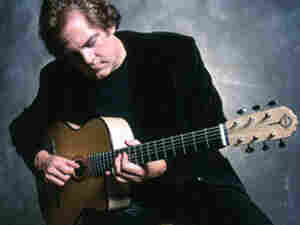 Guitarist John Jorgenson has insanely fast fingers — they're nothing but a blur when he's notes-deep into "Ultraspontane," the title track from his latest CD. Jorgenson is both a session musician and a headliner in his own right: He was a member of the hit-making country group The Desert Rose Band, and he's performed with Elton John, Bob Dylan, Sting, Barbra Streisand and Willie Nelson. He currently tours with the John Jorgenson Quintet, performing the style made famous by French guitarist Django Reinhardt: gypsy jazz.

Reinhardt was really the first guitarist to bring the instrument to the front of the band. When Jorgenson first heard Reinhardt, his curiosity led him to figure out just how the original hot club jazz guitarist was able to perfect his technique.

"Django sounded like Jimi Hendrix or something on an acoustic guitar — fiery and really vibrant," Jorgenson says.

But it wasn't only Reinhardt's technique that made him Django; it was also the guitar itself. Reinhardt favored the Selmer guitar, which features a large, D-shaped sound hole that amplifies an internal resonator invented by luthier Mario Maccaferri. The sound is unusually percussive and possesses a vocal quality, providing just the kind of bravado Jorgenson needs for the fast-paced music he plays.

"It's not as pretty and sweet and full as a normal Martin-style guitar. It's very penetrating," Jorgenson says. "If there's a band playing pretty loud, I can come in and it'll pop right above the noise created by the band."

In addition to playing the guitar, Jorgenson is also a master on the clarinet. The reed instrument provides him with a different sound and approach to inform his technique and composition. The necessity of breathing into the clarinet helps Jorgenson understand phrasing, as well.

"A joke people tell about guitarists is, 'Why does wearing glasses help a guitar player's phrasing? Because they have to stop and push the glasses up their nose,'" Jorgenson says. "Some guitar players will tend to just play and play and never take a breath."

Jorgenson was able to bring his love of gypsy jazz to a full orchestra recently, as the artist in residence for Orchestra Nashville's Adventure Series. Through the artist-driven record label, ArtistsShare, his collaboration with the orchestra will be available as the recording unfolds.