Accessibility links
'U2 3D' — Better Than the Real Thing? A new concert film featuring the band U2 was shot in digital 3-D. NPR's Bob Mondello says it's so realistic that he wanted to tell the guy sitting in front of him to stop waving his arms — then realized that the arms were on the screen. 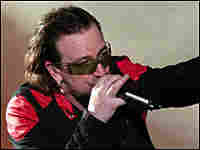 U2 front man Bono: U2 3D puts him in the room with you. 3ality Digital hide caption 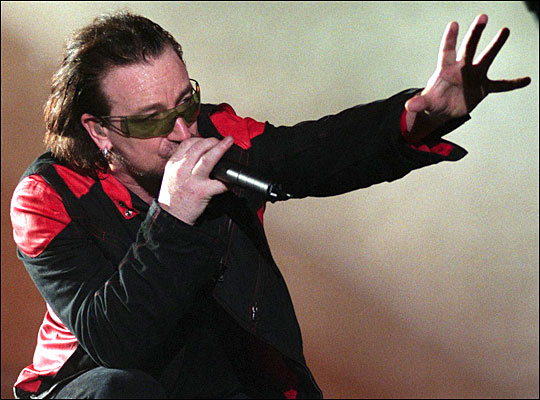 In February and March of 2006, the Irish rock band U2 visited Latin America on the final leg of its Vertigo tour. The band played stadium shows before tens of thousands of fans and more than a dozen 3-D camera rigs. The result is U2 3D, a film that opens today on IMAX screens across the nation.

The opening shot, of a stage in a giant stadium, is an image familiar from dozens of concert films. But this scene doesn't look familiar — because hanging in the air, seemingly 10 feet out in front of the screen, is the film's title.

When the band takes the stage, the camera swoops around the stadium, giving the movie audience some real-life vertigo. It flies from the nosebleed seats at Buenos Aires' River Plate Stadium down to a sprawling stage, where it zips behind Bono's microphone, zooms past The Edge on keyboards, circles Adam Clayton's bass and then hovers over drummer Larry Mullen Jr.

A process called 3ality was used for filming U2 3D; it's digital and high-def, using lots of double-camera rigs. You still need glasses to watch it, and you'll still be slipping them off to see what's real and what isn't, especially during shots where stadium crowds blend with the movie-theater crowd. At one point I was about to tap the shoulder of the guy in front of me to get him to stop waving his arms in the air — when I realized they weren't his arms. Seriously cool.

Now, this 3-D thing is a gimmick, and at first, the film just plays with it. U2's stage has two curving runways that put Bono out in the middle of the crowd, giving the cameras plenty of depth to exploit. And the filmmakers have fun soaring away from the sky-high Jumbotron that backs the band, poking microphones out into the movie theater and materializing one band member inside another band member via 3-D dissolve.

After the 3-D parameters are established, though, the cameras settle down a bit and let U2 take flight on its own. International anti-hunger appeals and the band members' stands on peace and justice have long given U2 shows a depth that has nothing to do with 3-D. The band delivers a pretty mesmerizing show in U2 3D, complete with IMAX sound and the feeling that you'd barely have to stretch out your arm to high-five Bono from your theater seat. Plus, there's no three-hour parking mess at the end of the show. Better than a rock concert? I'll let you decide on that, but let me tell you, it's close.