Accessibility links
Choosing a Doctor in the Digital Age A growing number of people are finding doctors through online review sites like Yelp, which post patient appraisals of a doctor's practice. But experts warn these patient reviews can be skewed.

Listen
Choosing a Doctor in the Digital Age 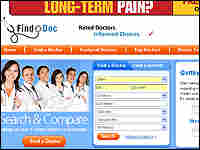 FindADoc.com is one of many sites where users can read patients' reviews of doctors. hide caption

Health consumers are increasingly shopping online for doctors through peer-based sites like FindADoc.com, DoctorScorecard.com, and even local city search sites.

Dr. Vail Reese is one of the most highly rated doctors on local San Francisco search engines. As a dermatologist, Reese sees patients with the usual embarrassing skin disorders: athlete's foot, acne, scary moles. In his beautiful art-deco offices, he gives every wart and blemish personal attention, peering at them through a large magnifying glass.

Reese says that about half his new patients find him through sites like Yelp, a social networking site that has a section where users can share their experiences about doctors.

The kind of patients who choose Reese this way are people like David Victor, a computer professional in his 20s. Of using the sites, Victor admits, "I was a little skeptical. I wasn't sure how easy it would be to taint the system."

There's no doubt that doctors can procure positive reviews from friends, relatives, or even patients. So Victor checked to make sure the reviewers had written about other doctors or topics and weren't just online to rave about Reese. Victor ended up giving Dr. Reese a try and writing a favorable review himself.

"My expectations were met and probably exceeded," he says.

Health insurance companies have been rating the performance of doctors for years, but consumers seem to prefer the opinion of their peers over a company that might have a financial interest.

WellPoint, the nation's biggest insurer, is apparently paying attention. It recently teamed up with Zagat — famous for its restaurant and hotel guides — to provide a rating system for doctors based on consumer input. According to founder Nina Zagat, the tool allows users to rate doctors on qualities of trust, communication, availability and environment.

Zagat says the physician-rating tool serves what she calls "the soft part" of a patient's choice.

"We were very careful not to include any criteria that we felt the individual consumer was not in a position to rate," she says, such as the technical ability of the doctor.

But while the touchy-feely part of the patient-doctor relationship is definitely important, choosing a doctor solely on superficial qualities can be a "disaster," says Dr. Robert Wachter, author of Internal Bleeding, a book about medical mistakes in America.

"Spectacularly good doctors every now and then have patients who die. Terrible doctors most of the time have patients who do just fine," Wachter says. "So when you look at one experience and try to extrapolate from that, 'Is this the person I want opening my chest up and fixing my heart?' — scientifically it's not the way you would want to go."

He says patient reviews are skewed because they're usually only written by people who either hate or love their doctors.

He also mistrusts insurance company sites which rate their own doctors, because they tend to steer patients to the cheapest rather than the best physicians. But, he says, at least these sites can tell you how many procedures a doctor has done.

That's particularly true with challenging medical conditions, says patient advocate Trisha Torrey. After being misdiagnosed with a rare, fatal lymphoma, she urges patients to search several different review sites. A full picture of a doctor's background, Torrey says, might include when they graduated from medical school, whether they're board-certified in their specialty area, and how long they've been in practice.

"What patients can do collectively is put pressure on doctors, hospitals, the government and others to create a set of information to allow patients to make truly informed rational choices," he says.

Some states are working with insurance companies to help forge national rating standards, but it could be a few years before they're in place.