NPR senior news analyst Daniel Schorr is following the Democratic presidential contest closely. And he has these thoughts on the most famous spouse on the campaign trail.

DANIEL SCHORR: In a moment of introspection on the campaign trail in South Carolina, Bill Clinton said think what being president is like. They play a song every time you walk into the room. After I left the White House, nobody played a song anymore. I didn't know where I was.

Clinton may not understand where he is these days as his campaign support of his wife adopts an increasingly striking tone. The man who was once described by Toni Morrison as America's first black president wages a personal war for the defeat of the candidate who would indeed be the first black president.

Clinton says that he's not standing in the way of Barack Obama's becoming the first black president - just not this year. I think Hillary would be a better president at this point in history, he says. But Bill Clinton's sharp criticism of Senator Obama with phrases like fairy tale and rolling the dice on the presidency may have alarmed some in the Democratic camp. They fear it may boomerang against Senator Clinton in the crucial primary next Saturday in South Carolina with its large African-American Democratic electorate.

Former Senate majority leader Tom Daschle says that Bill Clinton's conduct is not in keeping with the image of a former president. I think it destroys the party, Daschle said. And indeed, the tone of Bill Clinton's stump speeches does not seem to be in keeping with the ex-president who has written a book on giving and has joined high-minded bipartisan ventures with former President George Bush.

Many think that Clinton's current position as his wife's attack dog is a departure from his image as a philosopher philanthropist. He has provided an opening for Obama to say - as he did on ABC on Monday - that the ex-president has taken his advocacy on behalf of his wife to a level that I think is pretty troubling.

Bill Clinton has become more than a surrogate for his wife. Asked about the prospects for his wife in South Carolina, he said, this is a state I won in 1992. And I like it here and love being here. Some people are asking what's gotten into Bill. Whether Clinton yearns for the sound of "Hail to the Chief," well, that's something it'll take more than a journalist to analyze. 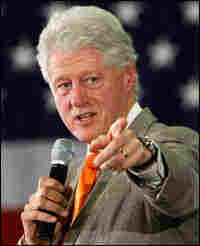 Former President Bill Clinton has been omnipresent on the campaign trail.

He has spoken to adoring crowds of Democrats and then, delivered red-faced rants to reporters. He has campaigned with his wife, New York Sen. Hillary Clinton, and campaigned without her.

The Clintons are increasingly being seen and covered as a pair — as though the two of them are running for president. This time, Hillary Clinton is the candidate, while Bill Clinton is the attack dog.

Sometimes he's not just attacking her opponents. Last week, he lacerated a reporter who asked him about a lawsuit that Clinton supporters had filed in Nevada. The lawsuit was in objection to state caucus rules, which Clinton supporters believed favored Obama supporters.

Hillary Clinton said she was neutral about the lawsuit. In the end, a judge ruled against the Clinton supporters who had brought it.

This was just the latest Bill Clinton tirade.

The former president has compared criticism of his wife to Republicans' swift boat attacks. He has called Obama's position on Iraq a "fairy tale" and has excoriated the media for not investigating Obama's past.

Sally Bedell Smith, who has written a book about the Clintons, is not surprised by the former president's intense, often emotional role in the campaign.

"Since Hillary's first race for the Senate in 2000, he has been very immersed in her campaigns in a way that they've almost become an extension of himself," Smith said.

That phenomenon, or impulse to justify his legacy, has become more apparent in the past few months, and at times, it has caused real problems for his wife, particularly when he said that he opposed the Iraq war from the beginning: a statement that was easily disproved within a matter of hours.

"I think that Bill Clinton always is concerned about his legacy. Clearly, his chief legacy would be to see Hillary Clinton being elected president, and he's fighting as only he can for that end," Dunn said. "But a huge part of that legacy also was the extraordinary affection and respect that African-Americans had for him. And he does run a risk with that huge part of the Democratic base, if he does continue personal attacks on Barrack Obama in this way. Short-term gain, long-term pain."

On the whole, Democrats agree that Bill Clinton is a net asset for his wife. He is a surrogate like no other — someone whose every word gets maximum media coverage. Democrats say his attacks on Obama worked in New Hampshire, by helping to crowd out Obama's message. It wasn't pretty, said one strategist, but it did help her win.

But other Democratic strategists, like Steve McMahon worry that the attacks could cause serious rifts inside the Democratic party — a potential problem for a general election.

"The campaign that Sen. Clinton and President Clinton are engaged in right now is a campaign designed to raise doubts about Barack Obama. To the extent that that's successful in the short term, I think it puts them in a position where, long term, they may do damage. If she is the nominee, and they're trying to get the Barack Obama-Lover back into the fold to support Hillary Clinton as vigorously as they'll need to in November in order for her to be successful, it's a very tough position to be in."

Then, as Sally Bedell Smith says, there is the famous Bill Clinton temper.

"One danger for them is that these displays of anger recall a lot of that turbulence from the 90s when they were arrayed against their enemies. If going forward, the nation wants to try and repair those sorts of rifts, it's not a reminder that's very helpful," she said.

Obama only mentions these issues obliquely, saying he doesn't want to refight the battles of the 1990s. But in a general election, if Hillary Clinton is the nominee, Republicans will not hesitate to be very specific.