Accessibility links
Long-Term Pact with Iraq Raises Questions A "declaration of principles" that sets the foundation for the future of America's involvement in Iraq is raising questions on Capitol Hill about how long the U.S. commitment there will last. 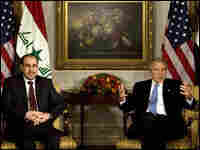 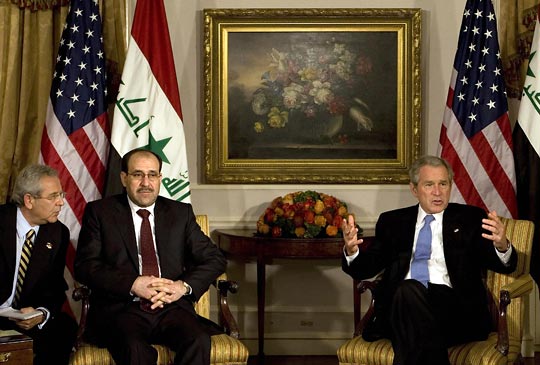 A 'Declaration of Principles'

Read the text of a joint letter issued by President Bush and Iraqi Prime Minister Nouri al-Maliki on Nov. 26, 2007.

President Bush and Iraqi Prime Minister Nouri al-Maliki issued a joint letter in November. On the surface, the "Declaration of Principles" appears as a mutual "expression of friendship," as it has been characterized by administration officials.

But a closer look reveals a blueprint for how the two administrations plan to set the foundation for the future of America's involvement in Iraq.

When administration officials describe that vision, the language they use is vague. The president recently spoke of an "enduring relationship." Secretary of State Condoleezza Rice talks about "a relationship with Iraq for the long term." Defense Secretary Robert Gates outlined "a mutually agreed arrangement whereby we have a long and enduring presence."

Rep. Bill Delahunt (D-MA) says such language is vague, and he has launched a series of congressional hearings to find out what it means.

He's asked administration officials to testify but, so far, they've all either ignored him or declined. Delahunt says they have declined because he and other lawmakers want to get a sense of secret negotiations under way between Pentagon and State Department officials and their Iraqi counterparts on the future relationship between Washington and Baghdad.

The "Declaration of Principles" includes language that seems run-of-the-mill. The United States will help get Iraq into the World Trade Organization. The two countries will engage in scientific and cultural exchanges.

But it also includes a provision that promises to maintain the stability of Iraq's government from "internal and external threats." This sentence is raising alarms for some U.S. lawmakers.

Any such agreement would be considered a treaty by many legal experts. And under the U.S. Constitution, treaties have to be ratified by Congress.

"The declaration of principles would appear to commit the United States to keeping the elected Iraqi government in power against internal threats," says Kenneth Katzman, a Middle East analyst at the Congressional Research Service. "I leave it to the lawyers to determine whether that's the definition of a treaty or not but it certainly seems to be — is going to be — a hefty U.S. commitment to Iraq for a long time."

Such a hefty commitment would be unprecedented in the history of American foreign policy.

The administration strenuously denies this is a treaty and has already made it clear that it won't take the issue to Congress.

They outline everything from what types of operations American troops can conduct in a foreign country to which laws the troops fall under. Usually, there's a provision that grants U.S. servicemen and women immunity from criminal prosecution in the host country.

The best-known examples are in Japan, South Korea and Germany.

And under the law, the president is entitled to broker a status-of-forces agreement without congressional approval.

"The president, as the commander in chief, can enter into an agreement and in theory, certainly as complex an agreement as he deems appropriate and necessary under the circumstances," says retired Gen. Michael Nardotti, formerly the Army's top lawyer.

But in the case of Iraq, even the most optimistic assessments don't expect the situation there to become as stable as Japan or South Korea for decades.

"Bases of the U.S. around the world are not situated in an occupied country," explains Raed Jarrar, an Iraqi political activist who recently testified before Congress on this issue. "For example, U.S. forces in Japan can't just go out of their bases and [set up] a checkpoint in Tokyo. They can't go around Tokyo arresting Japanese people."

In fact, the United States has no such agreement with any country that guarantees the integrity of the host country's government.

The U.S. has agreements with a few allies — including Japan, South Korea, Australia/New Zealand and NATO — to protect them from external threats. But in each of these cases, the U.S. signed a treaty that required ratification by two-thirds of the U.S. Senate.

"What's different about this agreement," says the Congressional Research Services' Katzman, "is the government in Iraq came about through a U.S.-led process and presumably the U.S. would be, in essence, defending the integrity of an Iraqi government. So there would be, presumably, internal security responsibilities that the United States would be performing."

And critics fear that kind of commitment could last decades.

"To embrace an agreement that could be invoked in the event of an Iraqi civil war, I think, is an extremely dangerous course to take," Delahunt says.

For their part, Iraqi leaders aren't mincing words. They call the upcoming agreement a treaty. At a recent press conference in Baghdad, Iraqi Foreign Minister Hoshyar Zebari called it a "long-term treaty."

Yet nearly half of Iraq's elected members of Parliament have signed a letter demanding a full U.S. military withdrawal from Iraq within the next two years.

But Iraq's top Cabinet ministers — people who depend on U.S. protection and the same officials negotiating on Iraq's behalf — have implied that large numbers of U.S. troops will be needed in Iraq for at least another decade.

That poses a problem because the U.S. Congress has passed three laws that prohibit any U.S. funding for permanent U.S. military installations in Iraq.

But according to Kurt Campbell — a top Pentagon official during the 1990s and now the head of the Center for a New American Security — there are also ways around that.

"While no one will say anything about permanent bases, [there are] lots of ways to create the potential for bases to be in Iraq for decades to come," he says.

So White House and Pentagon lawyers may opt to use adjectives like "enduring" or "continuing" instead of the word "permanent" when they announce the final agreement.

And to Campbell, the agreement is an attempt, "in the last days of the Bush administration, to hand a new administration a done deal."

The Senate is expected to consider a bill that would block the president from signing such an agreement with the Iraqi government. If the White House ignores the measures, Delahunt and others say the issue could go all the way to the Supreme Court.

A 'Declaration of Principles'

Following is the text of the "Declaration of Principles" between Iraq and the United States, issued by the White House on Nov. 26, 2007.

As Iraqi leaders confirmed in their Communique signed on August 26, 2007, and endorsed by President Bush, the Governments of Iraq and the United States are committed to developing a long-term relationship of cooperation and friendship as two fully sovereign and independent states with common interests. This relationship will serve the interest of coming generations based on the heroic sacrifices made by the Iraqi people and the American people for the sake of a free, democratic, pluralistic, federal, and unified Iraq.

The relationship of cooperation envisioned by the Republic of Iraq and the United States includes a range of issues, foremost of which is cooperation in the political, economic, cultural, and security fields, taking account of the following principles:

1. Supporting the Republic of Iraq in defending its democratic system against internal and external threats.

2. Respecting and upholding the Constitution as the expression of the will of the Iraqi people and standing against any attempt to impede, suspend, or violate it.

3. Supporting the efforts of the Republic of Iraq to achieve national reconciliation including as envisioned in the Communiqué of August 26.

4. Supporting the Republic of Iraq's efforts to enhance its position in regional and international organizations and institutions so that it may play a positive and constructive role in the region and the world.

6. Promoting political efforts to establish positive relationships between the states of the region and the world, which serve the common goals of all relevant parties in a manner that enhances the security and stability of the region, and the prosperity of its peoples.

7. Encouraging cultural, educational, and scientific exchanges between the two countries.

1. Supporting Iraq's development in various economic fields, including its productive capabilities, and aiding its transition to a market economy.

2. Encouraging all parties to abide by their commitments as stipulated in the International Compact with Iraq.

3. Supporting the building of Iraq's economic institutions and infrastructure with the provision of financial and technical assistance to train and develop competencies and capacities of vital Iraqi institutions.

5. Facilitating and encouraging the flow of foreign investments to Iraq, especially American investments, to contribute to the reconstruction and rebuilding of Iraq.

6. Assisting Iraq in recovering illegally exported funds and properties, especially those smuggled by the family of Saddam Hussein and his regime's associates, as well as antiquities and items of cultural heritage, smuggled before and after April 9, 2003.

7. Helping the Republic of Iraq to obtain forgiveness of its debts and compensation for the wars waged by the former regime.

8. Supporting the Republic of Iraq to obtain positive and preferential trading conditions for Iraq within the global marketplace including accession to the World Trade Organization and most favored nation status with the United States.

1. Providing security assurances and commitments to the Republic of Iraq to deter foreign aggression against Iraq that violates its sovereignty and integrity of its territories, waters, or airspace.

2. Supporting the Republic of Iraq in its efforts to combat all terrorist groups, at the forefront of which is Al-Qaeda, Saddamists, and all other outlaw groups regardless of affiliation, and destroy their logistical networks and their sources of finance, and defeat and uproot them from Iraq. This support will be provided consistent with mechanisms and arrangements to be established in the bilateral cooperation agreements mentioned herein. 3. Supporting the Republic of Iraq in training, equipping, and arming the Iraqi Security Forces to enable them to protect Iraq and all its peoples, and completing the building of its administrative systems, in accordance with the request of the Iraqi government.

The Iraqi Government in confirmation of its resolute rights under existing Security Council resolutions will request to extend the mandate of the Multi-National Force-Iraq (MNF-I) under Chapter VII of the United Nations Charter for a final time. As a condition for this request, following the expiration of the above mentioned extension, Iraq's status under Chapter VII and its designation as a threat to international peace and security will end, and Iraq will return to the legal and international standing it enjoyed prior to the issuance of U.N. Security Council Resolution No. 661 (August, 1990), thus enhancing the recognition and confirming the full sovereignty of Iraq over its territories, waters, and airspace, and its control over its forces and the administration of its affairs.

Taking into account the principles discussed above, bilateral negotiations between the Republic of Iraq and the United States shall begin as soon as possible, with the aim to achieve, before July 31, 2008, agreements between the two governments with respect to the political, cultural, economic, and security spheres.

President of the United States of America
George W. Bush

Prime Minister of the Republic of Iraq
Nouri Kamel Al-Maliki