Accessibility links
Officials Urge More Adult Vaccinations The Centers for Disease Control and Prevention wants adults to remember that vaccines aren't just for kids. Whooping cough, shingles, tetanus, and several other illnesses are still big problems in the U.S., mostly because adults aren't getting the shots they need. 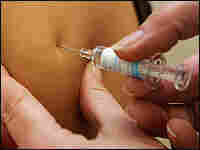 The CDC recommends the following vaccines for adults of various ages. Find out specific recommendations at www.cdc.gov.

The Centers for Disease Control and Prevention says that not enough adults are getting all the shots they need to prevent serious diseases. What's more, a new survey shows that the vast majority of adults lack awareness of vaccines and the severity of infectious diseases.

Routine immunizations during childhood "have saved hundreds of thousands of lives and have prevented millions of cases of disease," says Dr. Anne Schuchat of the CDC. But very few adults take advantage of vaccines that could prevent suffering and death.

Immunizations during adulthood are recommended for more than a dozen diseases (see box at left).

For example, more than one million adults get shingles every year, even though a vaccine now exists that eases the disease and even prevents it. It's approved for use by adults 60 and older. Yet only 1.9 percent of adults who qualify have received the vaccine, the CDC says.

The results are from the CDC's National Immunization Survey, presented at a press conference in Washington.

Many people don't know they're not at risk. But Dr. Michael Oxman of the University of California, San Diego, told reporters that "everyone who's had chicken pox — and basically that's everyone in this room — is at risk of shingles."

That's because the chicken pox virus can lay dormant and then reactivate decades later, causing shingles. Shingles usually appears as a blistering rash on one side of the face or torso.

Nearly everyone who gets shingles has pain. "And many people describe the shingles pain as the worst pain they've ever endured," Oxman says.

Other survey findings include:

--Only 10 percent of women age 18 to 26 have received the vaccine for human papillomavirus, which causes cervical cancer.

--Vaccination rates for flu and pneumonia are well below the 90 percent national target set for the elderly.

--Only 2.1 percent of adults 18 to 64 years old are immunized against tetanus-diphtheria-whooping cough.

"By skipping vaccination, people are leaving themselves needlessly vulnerable to significant illness, long-term suffering and even death," Schuchat says.

Flu and related cases of pneumonia kill 36,000 people annually. Wider flu immunization could prevent many of these deaths.

In addition, some 5,000 annual deaths due to pneumonia alone can be prevented with the pneumonia vaccine, says Dr. Robert Hopkins of the University of Arkansas for Medical Science in Little Rock.

Whooping cough is also on the rise in children and adults. Coughing can last for weeks or even months. The rise in the number of whooping cough cases puts vulnerable infants at risk of severe disease and even death.

A survey of public awareness released by the National Foundation for Infectious Diseases, revealed that most adults cannot name more than one or two diseases that are preventable by vaccines in adults. When asked about specific diseases, consumers said they were most concerned about flu, which likely reflects media attention to the disease.

To get more adults vaccinated, Schuchat says she hopes doctors and health care providers will lead the way. The CDC's survey found that many people say they would go ahead with the shots if their doctor recommended them.

"We obviously have a lot more work to do," Schuchat says. "and it involves literally rolling up our sleeves."

When parents bring their children in for shots, one can often sense a touch of relief that their time with the needle is over. Wrong. Many adults are due for shots. Though doctors often neglect this, it's worth pressing the issue.

Why immunize adults? The answer is simple: It's the most natural, specific and cost-effective way of preventing illness. Vaccines take advantage of the body's ability to act as a chemical factory. Since a person who is vaccinated is prevented from getting an infection, he or she also can't pass it on, thus helping break the chain of infection.

Tdap This newly introduced vaccine boosts protection against diphtheria, whooping cough and lockjaw, a horrible illness caused by certain soil bacteria when they enter the body through a deep injury. The vaccine should be repeated every 10 years and should also be given after an injury if it's been more than five years since your last dose.

Vaccines Two doses of chickenpox vaccine and, if you were born after 1957, at least one dose of measles, mumps or rubella vaccine. If you are 60 years or older, the shingles vaccine is strongly recommended. None of these should be given to pregnant women or people with suppressed immune systems.

HPV Vaccine If you are a woman under 27, three doses of the HPV vaccine guards against cervical cancer and genital warts.

Flu Shot If you are older than 50 or live in a household with a child under 2, get an annual flu shot.

Hepatitis A Shot If you are traveling to a wonderful place with less than wonderful sanitation, seek out a hepatitis A shot — nothing spoils a vacation like vomiting, diarrhea and turning yellow.