Accessibility links
Bireli Lagrene At The Cully Jazz Festival The phenomenal Bireli Lagrene can play anything, but his music extends a vital French tradition. The French guitarist has celebrated the hot club jazz of Django Reinhardt ever since the release of his first CD at age 13. Here, Lagrene performs with the Lausanne Big Band at a concert recorded in Switzerland. 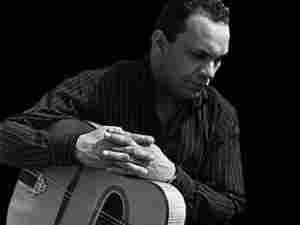 Lakeside in Switzerland, at the Cully Jazz Festival, it's 6 o'clock on Sunday evening. We're together with hundreds of people under a huge tent for a gala concert by the phenomenal guitarist from France, Bireli Lagrene.

Lagrene can play anything, but his heart belongs to jazz manouche, as the French call "gypsy jazz." In the late 1930s, the mustachioed Gypsy guitarist Django Reinhardt (1910-1953) and Parisian violinist Stephane Grappelli (1908-1997) put swing on strings and created the Quintette of the Hot Club of France.

Lagrene's father, Fiso Lagrene, was a Gypsy guitarist in the Reinhardt style, and gave Bireli his start. Born in 1966, Lagrene began playing the guitar at age 4. He made his first record, Routes to Django, at 13. Bireli is versatile: You'll hear his love for American guitarist Wes Montgomery and even Frank Sinatra. In the 1980s, he worked with the hyper-adventurous U.S. bassist Jaco Pastorius. And yet, through it all, Bireli remains true to his roots.

Recently, the famed WDR Big Band in Germany commissioned Michael Abene to arrange music by Reinhardt and others for the orchestra and Lagrene. Just a few days before this concert, the WDR sent the Lausanne Big Band the parts. The Big Band de Lausanne learned those parts and dressed up in red and black. Roby Siedel conducts.

Thanks to Swiss Radio producer and band member Yvan Ischer, as well as the European Broadcasting Union, for this concert on JazzSet.