Accessibility links
If It Bleeds, It Leads on a New Box Set The Grammy-nominated People Take Warning! collects historical songs of murder and disaster during a fertile era for blues and country music: 1913-38. With its cautionary title against the looming industrial age, these musicians took the sensationalism of calamity to song.

Listen
If It Bleeds, It Leads on a New Box Set

Wreck on the Mountain Road 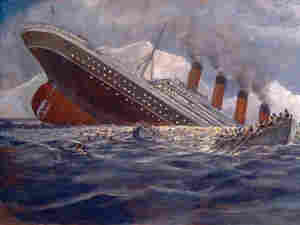 A three-CD box set, People Take Warning! features an introduction from Tom Waits, never-before-seen historical photographs, and notes and lyrics on each song.

You may be familiar with the Wreck of the Old '97, the plane crash that killed Knute Rockne, and the Mississippi Flood of 1927 — just three of the many debacles described on a new box set, titled People Take Warning! Murder Ballads & Disaster Songs, 1913-1938. This collection of early-1900s country and blues has just been nominated for a Grammy in the category of historical recordings.

There's a cliché about the news business that goes like this: If it bleeds, it leads. But if you think that our collective fascination with bad news is an unfortunate byproduct of modern culture, listen to "Titanic Blues" by Hi Henry Brown & Charlie Jordan. It's one of hundreds written about the Titanic. The sinking of the great ship is now a major historic event, not to mention a major motion picture, but when it happened in 1912, it was headline fodder. Songwriters at the time took notice.

The very title of this collection of music — People Take Warning! — sounds like an utterance of caution against the industrial age that loomed when these songs were written. Much like newspaper men and women, musicians knew that sensationalistic songs would sell, especially if there was a morality tale involved. Plane and train crashes fueled the public's mistrust of modernity. Devastating fires and epidemics were surely God's way of ridding the world of evil. But nothing would prove as timeless as the murder ballad. There's a disc devoted entirely to shocking tales of inhumanity, like the true story told on "Frankie Silvers," about a young woman who murdered her husband with an ax.

This three-CD box set of murder ballads and disaster songs is filled with misfortune and horror. But hidden amongst the chronicle of wretched events are some rare early roots-music gems, including what may be the very first truck-driving song. I'm a huge fan of trucking music, and I'd always thought that "Truck Driver's Blues" launched the genre in 1939. But "Wreck on the Mountain Road," by a North Carolina group called The Red Fox Chasers, predates it by 11 years.

The notion of turning reportage into song is anachronistic in an era when information is immediate and disposable. Even songs about recent events like Hurricane Katrina were mostly prayers for the aftermath, not documents of the tragedy. But our connection to the past represented on this box set is right there on the evening news: Calamity still sells. Perhaps it gives us a little comfort that our lives aren't so bad after all. Or maybe people just can't resist a good story.