Accessibility links
Kenyan Opposition Leader Calls for New Election Kenyan opposition leader Raila Odinga, who challenged President Mwai Kibaki in a contested election, says the only way to solve the dispute is for Kibaki to step down or for a new election to be held. Odinga denies claims that his party has orchestrated violence against Kibaki's ethnic group. 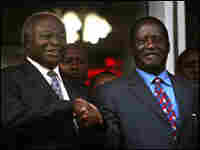 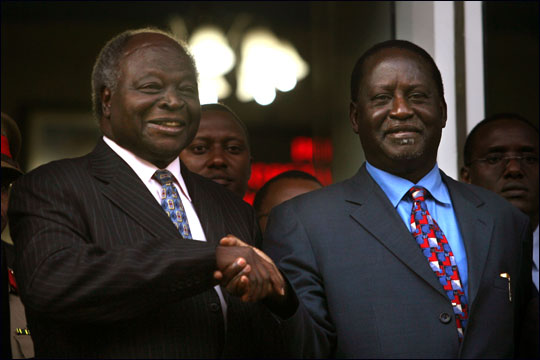 Kenyan opposition leader Raila Odinga, who challenged President Mwai Kibaki in a contested election last month, says the only way to solve the dispute is for Kibaki to step down or for a new presidential election to be held.

Odinga spoke Thursday with Melissa Block shortly after leaving a meeting with Kibaki that was mediated by former United Nations Secretary-General Kofi Annan — the first talks between the two rivals since the Dec. 27 election. Hundreds of people have been killed in violence triggered by the disputed results.

"Presidential elections within three months' time will settle this issue once and for all," Odinga says.

Kibaki has claimed victory, however, and appeared to say Thursday that his office was non-negotiable.

When asked what could prompt Kibaki to agree to either option, Odinga said, "His country's aflame, and there'll be no peace in Kenya until this matter is settled satisfactorily."

Responding to the idea that his followers could interpret his words as license for violence, Odinga said that he had "called for peace and that the people should handle themselves peacefully, but, as you know, there can really be no true peace without justice."

"No, nothing could be further from the truth," Odinga said. He said the violence "is most unfortunate and we have condemned it in the strongest tone possible. But I want to say that there has been no premeditation. What you have seen countrywide has been spontaneous reaction of the people to the rigging of elections, and this is what will need to be addressed."

Human rights groups have said opposition leaders arranged for transportation and supplied weapons to bands of youths to attack other tribes.

"Where is the evidence?" Odinga asked. "This is the propaganda put out by the government, talking about genocide. The people have just reacted angrily; it was not ... premeditated or preplanned at all."

An editorial in Kenya's leading newspaper, the Daily Nation, has accused Kibaki and Odinga of engaging in nothing more than a power struggle. But Odinga says it is more than that.

"Every Kenyan knows that I won the elections. I mean, there's no doubt in the mind of the people here," he said. "Now, what you want to ask is what does this portend for democracy in Africa? You know, democracy has a price; dictatorships, they don't go out easily. And unless it is sorted out to the satisfaction of the people of Kenya, I am sure that it will spell doom to democracy in our country."