Accessibility links
A Gospel According to Yoda The Stars Wars saga began long ago, in a world far, far away, but Daniel and Barney Jones are bringing its outlook to a church down the block. They've founded the U.K. Church of the Jedi, which has no deity but follows the teachings of Yoda.

Daniel Jones describes the new UK Church of the Jedi

Listen
A Gospel According to Yoda

A Gospel According to Yoda

Daniel Jones describes the new UK Church of the Jedi 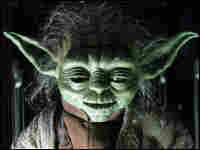 Daniel Jones noticed, as did many other people, that more than 390,000 people across England and Wales had claimed "Jedi" as their religion on the U.K.'s 2001 census. An Internet campaign may have driven up those numbers, but the results held a deeper meaning for Daniel and his brother Barney. That census report became their impetus to start the U.K. Church of the Jedi.

Daniel took on the name Master Morda Hehol and opened the main chapter in Anglesey, Wales, where he lives. Another is open in Surrey, England, and they've had calls from would-be Jedis in Washington and Colorado, people hoping to open chapters stateside. It's no joke to Daniel, who was atheist before adopting Jediism.

"We don't have a deity, we have the Force," says Daniel. "It's more like self-belief. If you believe in yourself, and you manipulate the Force, you can achieve great things."

Services have been held in his backyard garden, with plans to move to a building soon.

"The first part of the sermons we do 'Theory of the Force.'" The group then moves on to classes. "It may be lightsaber training, one month. The next month it may be technology and mind control."

On our blog, a listener challenge: Write a gospel or 10 Commandments for Yoda.