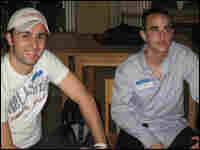 Republican voters in South Florida say there is no clear front-runner in their party.

The main issues for these voters is the economy, immigration and the war, but not necessarily relations with Cuba, typically a large issue for South Florida's large population of Cuban-Americans.

Johnny Betancourt, a chemistry major at Miami's Florida International University, says he thinks of Cuba as his grandparents' issue.

"Coming from a more Americanized family, that actually wouldn't be a voting issue for me or probably my parents," Betancourt said. "In fact, national intervention in Cuba might be seen as an analog to spreading democracy in the Middle East."

Fifty miles up the coast in Boca Raton, the economy dominated the discussion at a gathering of Republicans. Ron Price said he worries that the Republican party could lose the White House if the economy worsens.

Other voters were more hopeful, but still keenly felt their party's need for their votes in South Florida — perhaps more this year than ever before.