Accessibility links
The Whigs: Seizing 'Control' With garage-rock that exudes Southern charm, The Whigs' members hail from Athens, Ga. Singer Parker Gispert and drummer Julian Dorio discuss the state of rock music today, as well as the origins of the band's name.

Right Hand on My Heart 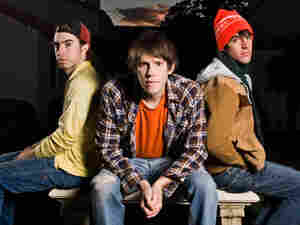 With garage-rock that exudes Southern charm, The Whigs' members hail from Athens, Ga. Their first album, Give 'Em All a Big Fat Lip, caught the ear of another Southern rocker: Dave Matthews. Mission Control, The Whigs' second album, has just been released on his label. Singer Parker Gispert and drummer Julian Dorio discuss the state of rock music today, as well as the origin of their band's name.

"Rock is probably as unpopular as it's ever been," Gispert said some time ago, and he still argues that point. But he says he's still optimistic that rock will prevail — and that it may one day become the kind of growth industry that would please his parents.

For The Whigs' first album, the band recorded in an abandoned frat house; they sold their recording equipment on eBay when they were done with it. They sold several pieces for more than they paid, and thus turned a profit on the album.

The band's name wasn't decided until Gispert called up a bar to book The Whigs' first gig. The owner asked what they were called, and Gispert realized that they'd forgotten a big part of the process of becoming a band. He told the bar owner he'd call him back. In about half an hour in a parking lot, the band came up with The Whigs.