Courtesy of the Kennedy Center

From the new CD Ovunque Proteggi: 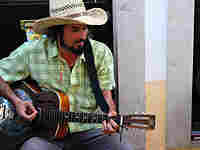 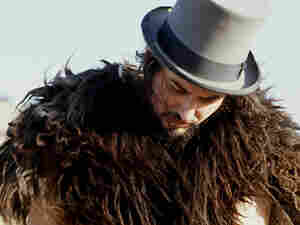 Italian singer-songwriter Vinicio Capossela likes to think of himself as an "enchanter." On stage he wears Minotaur and Medusa masks, growling, strutting, and, through his provocative lyrics, contemplating ideas of profound depth.

Although he's hardly known in the U.S., Capossela finds inspiration in America — its vast landscape, its writers and musicians.

"Whether we want to or not," Capossela says, "we all grow up with a little America in us; we have no choice. I've been fascinated with many American artists: Jack Kerouac, Tom Waits, Charles Bukowski."

Like those artists, Capossela is fascinated by low-brow culture. Down-and-out types populate his songs like the characters in a Raymond Carver short story or a Jim Jarmusch film.

Musically, Capossela and his band (which has occasionally included the versatile American guitarist Marc Ribot) stray all over the map. At a recent Kennedy Center concert in Washington, D.C. (watch a video), their sound was part circus band, part stripper band. The group is equally conversant in tango, blues, klezmer, mambo and mariachi. Occasionally, the music is meant to frighten.

"I have an attitude about the grotesque in my shows," Capossela says. "I like to scare people a little, but then make them feel safe again, and go home hugging each other like friends."

A perfect example of that philosophy can be found in the song "Medusa Cha cha cha."

"This song was born from a mask, made by a Swedish friend," Capossela says. "She had a portrait of Medusa, with big eyes. She told me, 'Don't worry, she's not a monster; she's just a little nervous because everyone she looks at turns to stone. And the only thing she can do to let it out is to dance the cha cha cha.'"

Capossela's new CD, Protect Me Everywhere (Ovunque Proteggi), is the third of his records to win the Italian Tenco Club award for Best Album of the Year. He says it's a collection of songs about "man, the earth, and its never-ending topicality."

Capossela was inspired by Italian geography. He took six months to make the disc, traveling to a new location to write and record each new song. He made stops at a prehistoric cave in Sardinia, an old church in Sicily, an abandoned monastery and the southern hills of Rubiera.

The disc opens with "Non Tratare" ("Do Not Bargain"), an Old Testament-inspired invocation of violence and ends with the prayer-like title cut.

"The story is always the same," Capossela says. "As we walk through life, we always have to leave behind something or somebody, and this separation always opens up a new wound. So the invocation is to protect the heart to help within us the things that we love and the things that help us belong to humanity."