Accessibility links
Storm Survivors Face Hard Choices in New Orleans More than 100,000 New Orleans residents who fled Hurricane Katrina in 2005 still haven't returned. But many of those who have returned say they are still struggling to rebuild their lives in a city where infrastructure and communities have vanished. 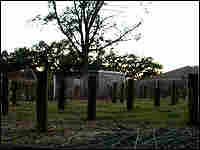 Angele Givens' home in the Gentilly district was destroyed by waters from the levee. She's now rebuilding it in the same spot, only a few feet higher. Nishant Dahiya, NPR hide caption 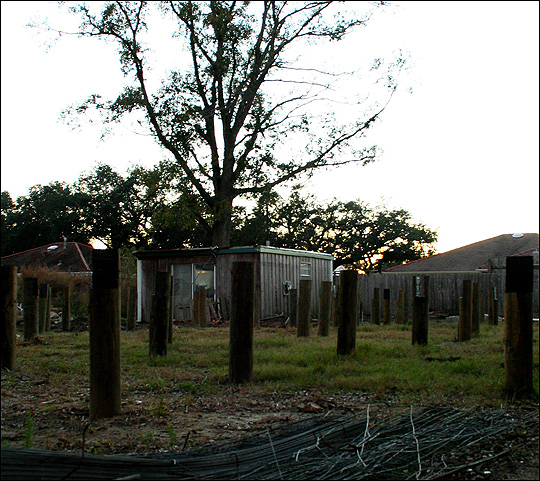 Angele Givens' home in the Gentilly district was destroyed by waters from the levee. She's now rebuilding it in the same spot, only a few feet higher. 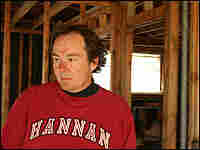 Ray Brandhurst stands in the gutted remains of his old home in Chalmette. He has moved his family to Slidell. Nishant Dahiya, NPR hide caption 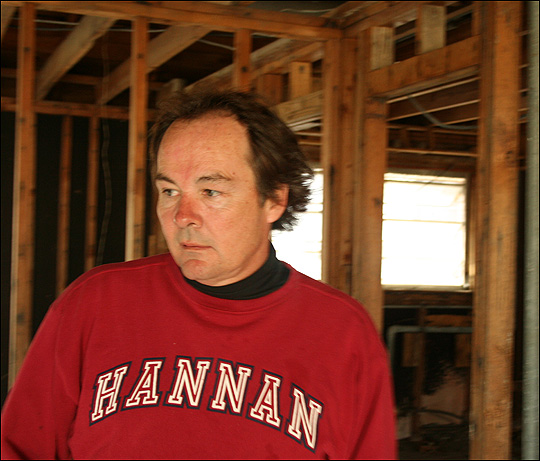 Ray Brandhurst stands in the gutted remains of his old home in Chalmette. He has moved his family to Slidell.

The Gentilly neighborhood of New Orleans used to be a middle-class area dominated by solid, ranch homes built mostly in the 1960s and '70s.

After Katrina, as much as eight feet of water poured through Gentilly. Many of the post-war houses are still standing but they're gutted and empty.

As Angele Givens walks along her old street, she points to the devastation.

What used to be a lush, residential neighborhood is now a mix of construction sites, vacant lots and empty buildings. Givens had her house demolished and now is in the process of rebuilding. Pressure-treated wood pilings that will serve as her new foundation stand like squat sentries across the vacant lot.

For Givens and so many others, New Orleans is a very hard place to be right now. Givens is paying a mortgage on a vacant lot and paying rent while she rebuilds. Almost two-and-a-half years after the storm, there still are no stores, no gas stations and no post office in the Gentilly neighborhood.

Givens says losing her house and belongings to Katrina was "the easy part."

"Let me tell you what I did lose," she says. "My neighbors. My church. My kids' school. My social network. My friends. Today, your friends are all here. Tomorrow, they're in Conneticut and they're never coming back. And here you are coming back, rebuilding. Most days I say, 'I must be crazy.'"

Givens and her husband were born and raised in New Orleans. Before Katrina, they expected their house in Gentilly would be their last. At times she second-guesses her decision to rebuild here, but she's committed to it now. Standing in a wasteland of construction debris and vacant lots, she says she stays because she wants to help make the new New Orleans.

To try to accomplish that, Givens and thousands of other volunteers have been clearing vacant lots, rebuilding playgrounds, boarding up abandon buildings and various other tasks that would normally be the city's responsibility.

Earlier this month, Paul Rainwater took over as the new head of the Louisiana Recovery Authority. He agrees that the overall recovery has moved slowly and that the task ahead remains huge. But he predicts that in 2008, state government will start to deliver tangible results: police and fire stations built, schools rebuilt, water and sewer service restored.

The LRA also oversees the billions of dollars in federal compensation for people who lost their homes to the hurricanes. The agency has vowed to process the roughly 90,000 remaining claims before the third anniversary of the storms.

One of the areas among the slowest to recover is St. Bernard Parish to the east of New Orleans. While the New Orleans population is now at about 70 percent of its pre-Katrina level, only about 40 percent of the residents of St. Bernard parish have returned.

Ray Brandhurst is one of the people who has not come back. He sold the house his family had lived in for 20 years to the state's Road Home program and moved his family to Slidell. Now his old house is gutted down to the studs.

Brandhurst says it was a tough decision to leave the neighborhood where he had spent most of his adult life. Some houses nearby are being rebuilt but many others are still empty. On some nearby streets, houses are still packed with mud, debris and smashed furniture just as they were in the days after Katrina.

State recovery officials say a decade could pass before these neighborhoods fully recover.

Brandhurst says he didn't want his kids to have to live through all that.

Before Katrina, Brandhurst worked as a shrimper, with a small seafood business in St. Bernard Parish. The hurricane sunk his boat and destroyed his retail store. He managed to refloat his shrimp boat. It's seaworthy even though it still isn't fully repaired.

With his shop gutted and his clients scattered across the country, Brandhurst says it has been hard to get his business going again.

"I had a business here for 22 years," he said. "The building and other things can be replaced, but when your customer base is displaced, that's a whole different situation because you got to start from ground zero."

Before the storm, Brandhurst and his wife had four to six employees, depending on the season. Now it's just the two of them. They sell most of their seafood at local farmer's markets and via mail order, shipping Lousiana crawfish, shrimp and soft-shell crab to many former clients across the country.

This is the "new normal." Business isn't back to what it was before Katrina. Brandhurst's commute and his work day are a lot longer. Yet he's excited about the prospects of selling seafood over the Internet.

Brandhurst and many other people say they are staying in Southeast Louisiana because they have hope not just that things will return to pre-storm levels, but because of the possibility that businesses, life and communities might bounce back even better.