Accessibility links
Democrats Await Outcome of S. Carolina Vote Republicans had their turn last week in South Carolina. On Saturday, the Democrats have their say. Barack Obama, Hillary Clinton and John Edwards are making last-minute appeals to the voters of the Palmetto State, but the stakes are perhaps higher for Obama and Edwards.

Republicans had their turn last week in South Carolina. On Saturday, the Democrats have their say.

Barack Obama, Hillary Clinton and John Edwards are making last-minute appeals to the voters of the Palmetto State. While all three candidates want to win Saturday's primary contest, the stakes are perhaps higher for Obama and Edwards.

The polls show Obama leading in a contest where the electorate is expected to be at least 50 percent African-American. And for Edwards, who has yet to win anywhere, it's the state of his birth and also where he scored his only primary victory in 2004.

We have three reports on the final campaign events from NPR's Audie Cornish, David Greene and Adam Hochberg.

Edwards Says He's 'In It for the Long Haul'

Edwards Says He's 'In It for the Long Haul' 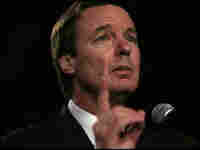 Sen. John Edwards is canvassing his home state of South Carolina, trying to foster support for his campaign, which is currently trailing in the polls behind Sens. Barack Obama and Hillary Clinton.

But, as he tells NPR's Farai Chideya, even if he doesn't perform well in the state's primary, he's not dropping out. The presidential candidate also talks about growing up in the South, envisioning a poverty-free America and the continuing battle for equality in the South.

You have talked many times, including this week's debate, about your father working in the mills. You yourself have succeeded in making millions of dollars living a much wealthier lifestyle. So, when people think about their place in America, what obligation do voters in your income bracket have to pay their taxes and take action on behalf of poor and working class people?

They have an obligation to do what I have done my whole life. I came from a family that had nothing. I worked hard all my life. In fact, the way I made my living was representing the kind of people that I grew up with — people who didn't have much of anything — and fighting against very entrenched, powerful corporate interests, and we were able to win and be successful. I did well by doing good. And what we have a responsibility to do is to make sure we don't pull the ladder out from behind us. In fact the core reason that I am running for president is to make sure everybody in this country gets the kind of chances and opportunities that I've had in my life. That's what drives me every single day.

A lot of your supporters mention that you really have a commitment to ending poverty, but could there ever be an America with absolutely no poverty? What would that country look like?

It would be a country where everybody has real economic opportunity. Is there always going to be a circumstance where someone can fall into poverty? Of course. That's the real world. But if we do the things we need to do, we wouldn't have the kind of systematic, endemic poverty that we have in America. We have 37 million people, which is roughly the population of California, who live in poverty every day in this country. It's not a small number. We are the richest, most prosperous country on the planet, and there are lots of things we need to do. We need to raise the minimum wage. We need universal health care. We need to make it easier for kids to go to college. We need to strengthen the right of unions to organize; expand the earned income tax credit. There is a whole group of things that need to be done to address poverty in a really serious way.

We had on Shun Griffin — he's a sophomore at Furman University in Greenville, South Carolina. He's a black man and he admitted that despite the fact that he's out there for you 110 percent, that sometimes people give him flack for being a black man who supports a white male candidate in a race with a black man and a white woman. So, do you worry that some of the people who might otherwise support your message are taking race and gender into an account in a way that doesn't favor you?

No, what I worry about is whether I am being heard. Martin Luther King III just put out a statement a couple of days ago saying that the things that I've been driving in this entire campaign and my life, which you and I have spoken about already, that the problem we have is being heard through the glitz and glamour of Sen. Obama's and Sen. Clinton's campaigns. And the money. The both have over $100 million in campaign money. That's the struggle that we have. When I get heard, it works. It works every single time.

Are you running out of money?

No, actually. Here's the amazing thing that's happened. Since the first of January, we raised a record amount online, on the Internet and as a result, the money won't be the issue. We have plenty of money.

You mentioned the glitz and glamour, of the Clinton and Obama campaigns. You have your own celebrity supporters like Danny Glover. Sen. Obama brought out Chris Tucker and Kerry Washington. There have been a lot of celebrities here in this state. Danny Glover is out here for you. How important is celebrity, and should it be important?

Nobody should decide who to vote on based on who a celebrity is for. And I don't think that this is news to anybody. Your listeners think exactly the same thing. They're not going to decide to vote for somebody because they have a celebrity supporting them. They're going to vote for them because they think they will be the best president.

Do you ever feel pressure to get into the mix and sling some harder punches, in a time where Sens. Clinton and Obama seem to be going at each other and getting headlines for it? Do you ever think, "I've got to put some muscle into this. And maybe I need to go after both of them?"

Oh no. I got plenty of muscle in this. My muscle is different thanwhat you see from the two of them. What we saw in the debate in Myrtle Beach on CNN Monday night was a lot of petty bickering and personal in-fighting between the two of them. And I was glad to be the grown-up on the stage, because this is not about any of us personally. All that bickering is not going to get a single child health care, it's not going to lift a single American out of poverty, it's not going to create a single job. And as long as we're talking about the differences that we have on issues, and we have differences on issues — on health care, on exactly what we're going to do to end the war, how we will create jobs and end global poverty, excuse me, global warming. I mean, we have differences on these substantive issues. But when it gets to the level of petty bickering and personal attacks, this is not helping anybody. And that's my view about it and I have no intention of engaging in it.

We're here in the South. You're a native Southerner. This part of the country where history has been written and rewritten, depending on who you consider the victor. And right now there's this tussle over Ben Tillman — "Pitchfork Ben" — a South Carolina governor and senator in the late 19th century who supported lynching. There's a question of whether or not to take down a statue of him. But how do you think Southern history, including the history of race relations should be featured, focused on, talked about by people like yourself who have power?

Well, I can tell you my own perspective. I grew up in the South — in South Carolina, Georgia and North Carolina — in the '50s and '60s. I saw the segregated South during my youth, and I saw the South transition during the Civil Rights Movement. I take it as a huge personal cause to continue the march to equality in this country. And I think having lived through it, and not having seen it on television or read about it in a book, but actually having lived through the loss of lives, the extraordinary sacrifice of men and women who literally put their lives on the line to move this country toward civil rights, toward equality. I feel like I carry a huge responsibility and a huge burden. I said this in the debate and I believe it. We can put our head against the wall and pretend that history doesn't exist. But the reality is, we had decades of slavery, followed by decades of segregation, followed by decades of discrimination, and some of that discrimination still continues today. And I think people like me, who have lived through a lot of this, carry an enormous responsibility to carry on the march toward equality in this country.