Adam Hochberg with the Edwards Campaign 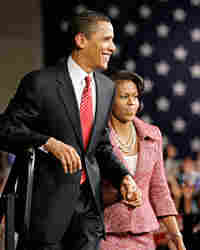 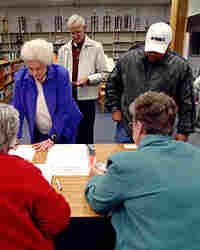 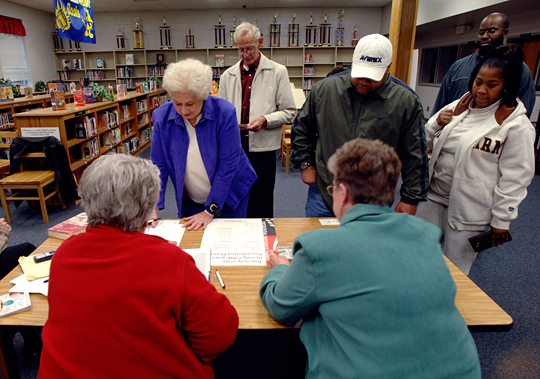 Voters line up to check with poll workers before voting during the South Carolina Democratic primary in Orangeburg, S.C.

Riding the overwhelming support of African-American voters, Illinois Sen. Barack Obama won South Carolina's Democratic primary with 55 percent of the vote and secured his place in the presidential race.

While he defeated his main rival, New York Sen. Hillary Clinton, by a ratio of 2 to 1, Obama seemed mindful that he had won 80 percent of the black vote and less than 25 percent of the white vote.

In his victory speech, Obama focused on bringing together people of diverse backgrounds rather than courting a single voting bloc. "This is about the past versus the future, about whether we settle for the same divisions," he said, as his supporters chanted "Yes, We Can."

Clinton came in second, with 27 percent of the vote, most of it cast by white voters whom she shared about evenly with former North Carolina Sen. John Edwards, a native of South Carolina. Edwards got 18 percent in the state that had given him his only primary win as a candidate in 2004.

Clinton had already left the state by the time the results were announced, offering her concession at the start of an extensive speech later in the evening in Nashville, Tenn. She told supporters she was looking ahead to Feb. 5 "when millions of Americans will have the chance to have their votes counted," she said. Two dozen states will have contests that day.

Clinton also said she was looking forward to the Florida primary on Tuesday, an event that has been proscribed by the Democratic National Committee and that will yield no delegates to the national convention. Democratic candidates, including Clinton, had promised to avoid campaigning in Florida.

Roughly 522,000 people voted Saturday, with lines forming at several polling stations early in the morning. It was easily the largest number to vote in a Democratic primary in South Carolina and exceeded by 100,000 the number cast in the South Carolina GOP primary on Jan. 19.

Exit polls showed that the economy was the most significant issue, set against the country's growing fears of a recession. Half those polled cited this as the top issue, with about one fourth citing health care and one fifth the war in Iraq.

In the ongoing debate between change and experience, Obama won voters who wanted change; Clinton attracted the votes of South Carolinians who favored her Washington experience. At least half of Edwards' supporters chose empathy with their problems as the most important trait for a president.

The Associated Press and TV Networks called the race for Obama as soon as the polls closed at 7 p.m.-- a swift end to what had been an acrimonious week of campaigning.

During a debate in Myrtle Beach on Martin Luther King Jr. Day, Obama and Clinton traded barbs that set the tone for the rest of the week. Clinton accused Obama of admiring former Republican President Ronald Reagan and doing legal work for a slumlord. Obama, in turn, pointed out that Clinton once served on the Wal-Mart Board of Directors.

The campaign dynamic both in the state and nationally was dominated throughout the week by the sharp comments of former President Bill Clinton, was has assumed an ever larger role in his wife's campaign. After the results were in Saturday night, Clinton compared Obama's win to Jesse Jackson's strong showing in the state in 1984 and 1988.

From NPR Staff Reports and the Associated Press