Suharto, the former Indonesian leader, is credited with greatly improving the country's economy, literacy rates and public health in the first part of his 32-year rule.

But he is also blamed for massive human rights abuses in East Timor, Papua and Aceh, as well as an anti-communist purge in the mid-1960s that left half a million dead.

The U.S. government looked the other way because Indonesia was regarded as an anti-communist ally during the Cold War. 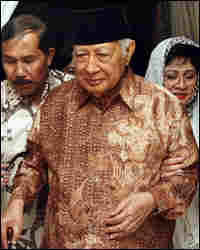 Former Indonesian President Suharto walks with his daughter Siti Hardiyanti Rukmana, right, and aide during the celebrations of his 86th birthday at his home in Jakarta, Indonesia on June 8, 2007. AP/Edo hide caption 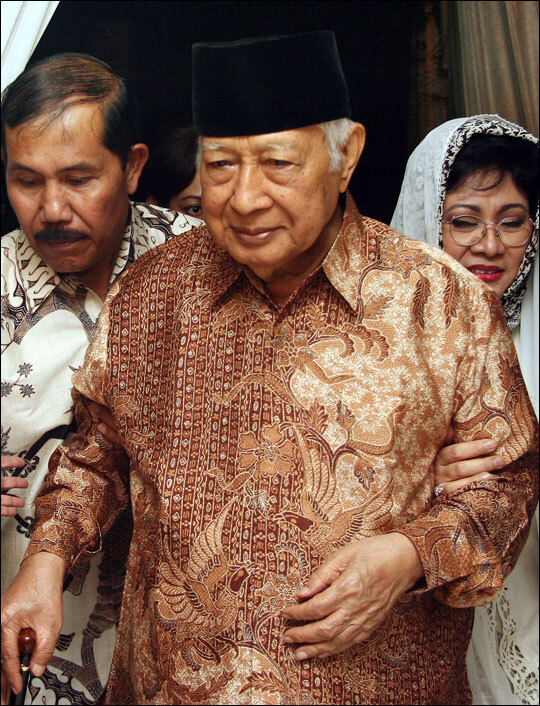 Former Indonesian President Suharto walks with his daughter Siti Hardiyanti Rukmana, right, and aide during the celebrations of his 86th birthday at his home in Jakarta, Indonesia on June 8, 2007.

Suharto, the general who emerged from obscurity to rule Indonesia with an iron fist after brutally suppressing a 1965 communist uprising, died Sunday in Jakarta at age 86.

The former president, who was forced out of office 10 years ago after three decades in power, entered the hospital Jan. 4 after his heart, kidneys and lungs weakened. Doctors prolonged his life through dialysis and a ventilator, but he stopped breathing on his own overnight before slipping into a coma Sunday.

He was declared dead at 1:10 p.m. when his heart stopped. The cause of death was multiple organ failure, Chief Presidential Dr. Marjo Subiandono said.

"My father passed away peacefully," sobbed Suharto's eldest daughter, Tutut. "May God bless him and forgive all of his mistakes."

Suharto's regime was widely regarded as one of most corrupt and brutal of the 20th century. He came to power after a group of left-wing army officers and leaders of the Indonesian Communist Party tried to seize control in Jakarta. Suharto narrowly escaped the fate of many of his fellow generals who were assassinated during the uprising. In the coming days, he rallied loyal troops and crushed the uprising, massacring hundreds of thousands in the process.

Then-President Sukarno, who had led the sprawling archipelago nation to independence from the Netherlands in 1949, was weakened by the political crisis and Suharto deftly exploited the chaos. By March 1967, Suharto outmaneuvered Sukarno and took over the presidency. Sukarno died under house arrest three years later.

During his years in office, Suharto brutally dealt with dissenters and was accused of siphoning off billions of dollars of state funds for himself, family and close associates.

Even after leaving office, Suharto steadfastly rebuffed the allegations as "empty talk." In 2004, however, he topped a "most corrupt" list put out by the nongovernmental organization, Transparency International, which said he had taken between $15 billion and $35 billion during his years in power. The Berlin-based group tracks corruption worldwide.

The former strongman had been previously charged with graft but escaped prosecution when he was deemed too ill to stand trial. The deterioration in his health in the days before his death prompted some senior politicians and one of Suharto's daughters to call for all remaining legal proceedings against him to be dropped.

During the Cold War, Suharto's anti-communist credentials made him a key U.S. ally; he enjoyed close relations with several U.S. administrations. In 2001, declassified documents confirmed a long-held suspicion that in a December 1975 meeting with President Gerald Ford and Secretary of State Henry Kissinger, Suharto was given the green light to invade the breakaway region of East Timor.

By 1997, a meltdown in Asian currencies sent economic shockwaves through the region, and Indonesia's rupiah was among the hardest hit. Years of pent-up anger against Suharto's regime boiled over into the streets of Jakarta and by 1998, the capital was wracked by riots amid a collapsing economy.

Still, Suharto clung to power, running unopposed for reelection in March 1998. The sham vote sparked further protests and dissention within Suharto's own Golkar party. To avoid a potential civil war, Suharto agreed in May 1998 to step down and hand power to his deputy, B.J. Habibie.

Since stepping down as president, Suharto had lived a quiet and secluded life in a leafy Jakarta suburb, rarely venturing from his mansion.

Despite the brutality of his rise and years in power, Suharto did preside over unprecedented growth in Indonesia, the world's most populous Muslim nation. That has led many to suggest that his legacy comprise equal doses of praise and criticism.

"He brought Indonesia into modern world," said Dewi Fortuna Anwar, a professor at the Indonesian Institute of Sciences.

Salim Said, a political analyst said that, as a young man, he saw first-hand the rapid economic progress spawned by Suharto's policies, but the other side of the leader "enriched himself, as well as his cronies."

"That is the black part, (the) dark part of Suharto," he said.

With additional reporting from NPR's Michael Sullivan and The Associated Press.