Accessibility links
The Universe Is Conspiring to Help Us Whether hitchhiking to work or bicycling across the country, Wired magazine founder Kevin Kelly always found strangers willing to help him. Kelly believes that to be a good giver, you must also know how to receive. 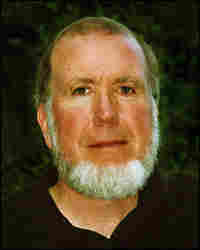 Kevin Kelly is senior maverick at Wired magazine, which he helped launch in 1993. For six years he edited and published the Whole Earth Review. Kelly lives in Pacifica, Calif., where he writes about long-term trends and social consequences of technology. Courtesy of Kevin Kelly hide caption

Kevin Kelly's This I Believe essay was adapted from a Christmas card he sent to family and friends in 2007. Click here to read his essay in full. 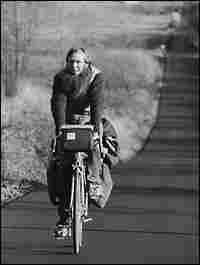 As a young man, Kelly rode his bicycle across the United States. Each night, he would knock on a stranger's door and ask if he could camp in their yard. "I was never turned away, not once," he says. Courtesy of Kevin Kelly hide caption 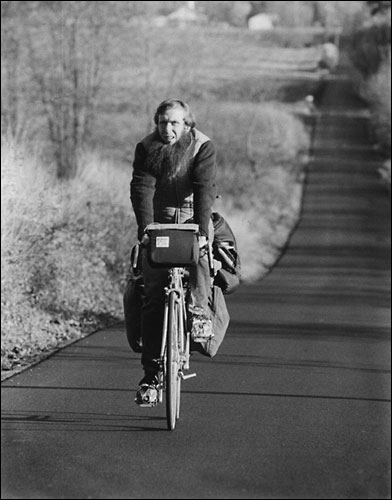 As a young man, Kelly rode his bicycle across the United States. Each night, he would knock on a stranger's door and ask if he could camp in their yard. "I was never turned away, not once," he says.

When I was in my 20s, I would hitchhike to work every day. I'd walk down three blocks to Route 22 in New Jersey, stick out my thumb and wait for a ride to work. Someone always picked me up, and I was never late. Each morning, I counted on the service of ordinary commuters who had lives full of their own worries and yet, without fail, at least one of them would do something generous, as if on schedule. As I stood there with my thumb outstretched, the only question in my mind was simply, "How will the miracle happen today?"

Shortly after that job, I took my wages and split for Asia. I've lost track of the number of generous acts aimed at me there, but they arrived as dependably as my daily hitchhiking miracle.

I have developed a belief about what happens in these moments and it goes like this: Kindness is like a breath. It can be squeezed out, or drawn in. To solicit a gift from a stranger takes a certain state of openness. If you are lost or ill, this is easy, but most days you are neither, so embracing extreme generosity takes some preparation. I learned to think of this as an exchange. During the moment the stranger offers his or her goodness, the person being aided offers degrees of humility, indebtedness, surprise, trust, delight, relief and amusement to the stranger.

One year I rode my bicycle across America. In the evenings I'd scout houses for a likely yard to camp in. I'd ring the bell and say, "I'd like to pitch my tent tonight where I have permission. I've just eaten dinner, and I'll be gone first thing in the morning." I was never turned away, not once. And there was always more, like an invitation into their home. My job at that moment was clear: I was to relate my adventure, and in the retelling of what happened so far, they would get to vicariously ride a bicycle across America — a thrill they secretly desired but would never do. In exchange I would get a place to camp and a dish of ice cream.

When the miracle flows, it flows both ways. With each gift the threads of benevolence are knotted, snaring both giver and recipient. I've only slowly come to realize that good givers are those who learn to receive with grace as well. They radiate a sense of being indebted and a state of being thankful. As a matter of fact, we are all at the receiving end of a huge gift simply by being alive. Yet, most of us are no good at being helpless, humble or indebted.

As with my hitchhiking rides, the gift is an extravagant gesture you can count on. No matter how bad the weather, soiled the past, broken the heart, hellish the war, I believe all that is behind the universe is conspiring to help us — if we will humble ourselves enough to let it.

Kevin Kelly's This I Believe essay was adapted from a Christmas card he sent to family and friends in 2007. Below you can read his essay in full: