Accessibility links
Sen. Kennedy Endorses Obama Massachusetts Sen. Edward Kennedy is endorsing Barack Obama for the Democratic presidential nomination. Kennedy characterized Obama as a "man with extraordinary gifts of leadership and character" during a rally in Washington on Monday. 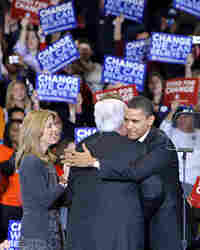 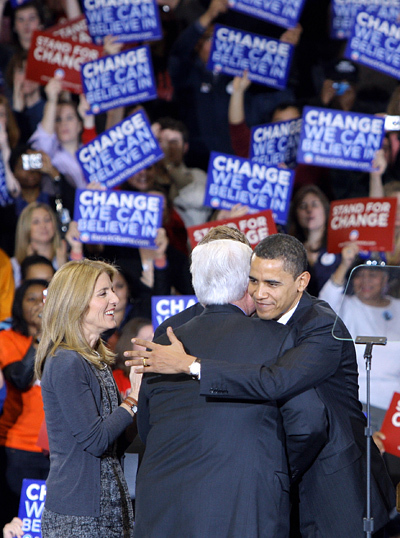 Illinois Sen. Barack Obama hugs Sen. Edward Kennedy of Massachusetts after he and Caroline Kennedy endorsed the candidate for the Democratic presidential nomination in Washington, D.C., on Monday.

Sen. Edward Kennedy on Monday endorsed Barack Obama for the Democratic presidential nomination, saying the Illinois senator is a man with both leadership and character.

During a rally at American University in Washington, the veteran Massachusetts senator and youngest brother of assassinated President John F. Kennedy said Obama generates hope that the nation's greatest days are ahead.

"With Barack Obama we will close the book on the old politics of race against race, gender against gender, ethnic group against ethnic group, and straight against gay," Kennedy said.

The Democratic Party stalwart, who has been in the Senate since 1962, is expected to actively campaign for Obama in the days leading up to the "Super Tuesday" primaries on Feb. 5.

In an opinion piece in The New York Times on Sunday, Caroline Kennedy said that Obama may inspire people the way her father did. She introduced her uncle to an enthusiastic crowd at American University on Monday, reiterating her support for Obama.

The Kennedy family is not united behind Obama, however.

"I respect Caroline and Teddy's decision, but I have made a different choice," Kennedy Townsend said.

The Democratic nomination is still up for grabs, even though Obama soundly beat Clinton and former North Carolina Sen. John Edwards in South Carolina's Democratic primary on Saturday.

The candidates are now concentrating their efforts on the states that vote Feb. 5, though Clinton has promised to travel to Florida on Tuesday night after that state's primary.

The Democratic National Committee stripped Florida of its delegates to the party's nominating convention because the state moved its primaries up to Jan. 29.

Morrison said she is inspired by Obama and prefers his "vision" over rival Sen. Clinton's experience.

It was Morrison who famously called former President Bill Clinton "the first black president" in a 1998 magazine column.