Accessibility links
Saba's Somali Songs of Hybrid Identity Born in Somalia to Italian and Ethiopian parents, the singer known as Saba grew up among several different cultural traditions in Italy. On her debut album, Jidka, she meditates on her African roots. Hear an interview and studio performance. 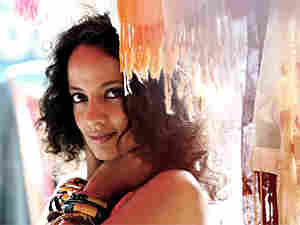 Though she left at the age of 5, Saba says she harbors vivid memories of Somalia. Courtesy of Saba hide caption

She was raised in Italy by her Italian father and Ethiopian mother. But the actress and musician Saba Anglana, who records under the name Saba, sings in Somali.

Saba was born in Somalia, but she was only 5 when authorities, who disapproved of her parents' marriage, forced her family out of the country. Now, she's released a debut album called Jidka: The Line, which draws on her musical and cultural heritage as a Somali exile.

Saba speaks with host Madeleine Brand, and performs a few songs from her new album from a studio in Turin, Italy.

She begins with "I Sogni," meaning "dreams." It tells a story about a girl who leaves everything behind when she leaves home for better life opportunities.

"There are about 192 million people living outside their place of birth, and I am among them," Saba says. "Because I left Somalia when I was a child."

Though civil war has prevented her from ever returning to Somalia, Saba says she still harbors strong memories of the country.

"Africa in general has a strong power," she says. "From one side, it has a sweet power, a joyful power. And the other side is a sort of dramatic power, violence. And these two things, opposite things, are living together. And, of course, it's very striking."

On Jidka, Saba set out to reconnect with those African roots. Having spent most of her childhood growing up in Italy, she felt pressured to better understand her ethnic identity.

"But I had to face, very early in my life, this problem of identity ... since I was a child, I had to learn very quickly to define my identity. And I found out that my identity is not something given, I mean something that cannot change. It's something that changes day by day. It's a matter of growing and growing from the human point of view."

Though Somalia has been wracked by civil unrest, Saba remembers a brighter side to her life in Mogadishu.

"I remember it was a joyful place where to live, and I wanted to record this positive side," she says. "Because we don't think, we have to think about Africa speaking about only the negative sides, and the poverty, and the diseases, and all this kind of thing.

"But we are witness of this good way of living in Africa. It could be possible. I mean, I hope now that the situation could get better."

She closes with a tune called "Hoio," based on a Somali lullaby. She dedicates it to mothers living far away from their children.