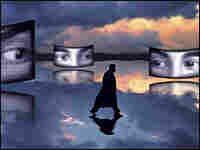 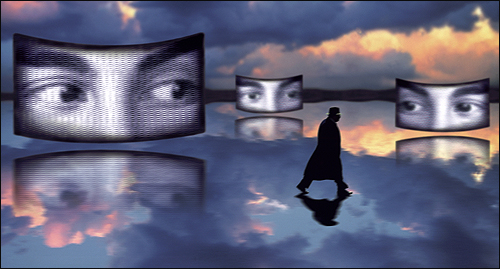 Visual hallucinations are a feature of Charles Bonnet syndrome. These phantom images are often "seen" by people with severe visual impairments caused by macular degeneration or retinitis pigmentosa.

A former long-time executive at the Corporation for Public Broadcasting in Washington, D.C., Stewart has a hereditary disease, retinitis pigmentosa, which affects the rods and cones in his eyes. In his 20s, his vision narrowed. By the time he hit 80, he was almost totally blind.

But then he discovered that sometimes blindness comes with a bonus.

One day while listening to a book on tape — 1776 by David McCullough — he heard how American sailors helped George Washington sneak cannons and horses across the Hudson River to escape the British.

As Stewart mused about those sailors, very strangely, one of them appeared in his head — not a dreamy fantasy, but a vivid, highly detailed, very real-like hallucination.

"He had on a cap, a blue cap with a polished black beak and he had a pipe in his mouth." The sailor gazed right at Stewart. Then he winked. Stewart was amazed.

Stewart was, at this point, very blind. He had lost his memory for color — for blues, yellows and reds — and he lived in a black and white world. But when his sailor arrived, "There it was!" he exclaimed. "The first color I had seen for a considerable amount of time!"

After 30 minutes, the image faded, but others would follow. Paintings would come to life. Wallpaper would move. Mysterious curtains would appear. Stewart says he was never frightened, but he wondered what triggered all this.

Who Put that Sailor in My Head?

One of his sons, who already is experiencing this same disease, found the explanation. Stewart has Charles Bonnet syndrome, a condition that often affects people with macular degeneration or diabetic eye disease. A surprisingly large percentage of people who lose sight start seeing things, says ophthalmologist Jonathan Trobe of the University of Michigan.

"The brain is doing a mash-up of stored visual memories," says Trobe. When visual cells in the brain stop getting information — which happens when your rods and cones stop working — the cells compensate, he explains. If there's no data coming in, they make up images. They hallucinate.

Trobe thinks maybe 10 percent of all people who go blind will have this experience. "It's very common," he says.

In 2004, scientists at Harvard blindfolded normal, sighted people, and within hours many of them began to see imaginary landscapes, patterns and occasionally people.

Very often, says Trobe, elderly patients are afraid to mention these appearances, fearing that family members or doctors will think them mentally unstable. And while some people do get frightened by what they see in their heads, most don't.

Stewart, in fact, says he has learned to enjoy his phantoms. He can even trigger them, he thinks.

When he was going blind, Stewart was advised to eat fish as often as possible, so he developed a thing for tuna, especially tuna sashimi.

Before our interview, he told me that tuna at lunch often triggers hallucinations. So Jessica, my producer, brought him a private stash. And sure enough, about 10 minutes later he matter-of-factly "noticed" a green curtain in the room.

The thing is, Stewart shows no signs of being a flake or a hysteric. He was a manager, a financial officer, a pioneer in arts broadcasting in Europe. He's a sober man who has discovered, to his delight, that he can still experience color, even though, technically there is nothing there for him to see.

It's an experience manufactured by his hallucinating brain. But rather than be spooked by these phantoms, he wants more of them. It's as though, having been deprived of sight, he has figured out a final end run and instead of seeing from the outside in, he now sees from the inside out.

And if Stewart's hallucinating brain interests you, check out the story about what happens to deaf people who also hallucinate. You'll learn about an older lady who "heard" the voice of what may have been her long-dead mother.

Or, listen to what happened to a young sailor, not deaf, who was just stuck on an empty, flat quiet ocean for two weeks and "heard" phantom heavy metal guitar riffs and bagpipes.

Special thanks to independent producer Mary Beth Kirchner. Support for this story was provided by the Dana Alliance for Brain Initiatives.