Accessibility links
Berlin's Historic Tempelhof Airport Faces Closure Tempelhof Airport, once a symbol of Nazi power, will likely see its last flight in October. Its runways are not big enough for large planes, and Berlin is building a new airport on the city's outskirts. Still, many residents aren't ready to let go of this piece of the city's history. 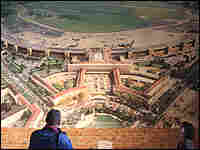 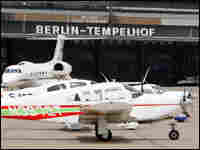 Today, private planes and a few smaller commuter flights are about the only air traffic at Tempelhof Airport. Sean Gallup/Getty Images hide caption 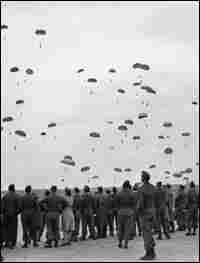 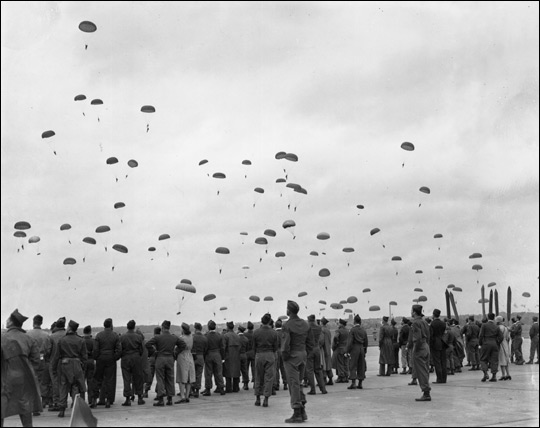 American soldiers watch as men of the 504th Parachute Infantry of the 82nd Airborne Division descend on Tempelhof Airport, Berlin, on Sept. 6, 1945. 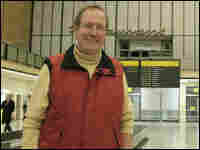 Ulrich Kirschbaum remembers the "candy bombers" from the post-war years. He runs a citizens' initiative to preserve the historic airport. Khue Pham for NPR hide caption 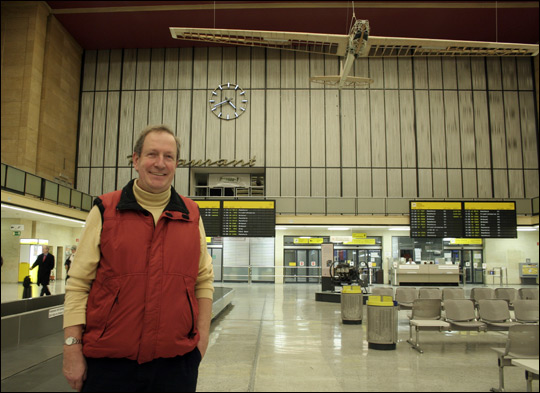 Ulrich Kirschbaum remembers the "candy bombers" from the post-war years. He runs a citizens' initiative to preserve the historic airport.

Tempelhof Airport in Berlin, once a symbol of Nazi power, will likely see its last flight this October. Its runways are not big enough for large planes, and Berlin is building a new international airport on the city's outskirts. Still, many residents aren't ready to let go of this piece of the city's history.

With its monumental terminal and office, it was once a central part of Adolf Hitler's plan to draw visitors to Berlin, but the building is now a shadow of its former self.

The airport also played an important role in Cold War history. Today, private jets and a few smaller commuter flights are about the only air traffic that the airport sees, but following WWII, Tempelhof was bustling with air traffic. In 1948 and '49, many of the Allied flights landed there, bringing in food and other provisions to a West Berlin under Soviet blockade. Then in the U.S. sector, the airport was the focal point of Berlin Airlift.

Ulrich Kirschbaum was 6 at the time and lived near the airport. He remembers standing on his balcony with his father and brother and timing the landings of "candy bombers," U.S. pilots who dropped goodies to eager Berlin children.

"Once I saw that airplanes were dropping something, I ran over there where all these people had gathered," he recalls. "Then I saw something white floating down. They were these little parachutes with chocolate."

To Kirschbaum and many others, especially older Berliners, the thought of closing an airport with this historic significance is unthinkable. He's the vice president of a citizens' initiative that's gathering signatures for a referendum on keeping the airport open. It's even got its own song called "Keep Your Hands Off Tempelhof."

Kirschbaum says it's not just nostalgia fueling the campaign. Even after Berlin Brandenburg International opens in 2011, it makes sense to keep an inner city airport for business travelers, he insists.

But just beyond Berlin's eastern city limits, where bulldozers are leveling the ground for the new international airport, planners say the economics are firmly in favor of a closure. Rainer Schwarz, the CEO of the company that manages Berlin's airports, says Tempelhof loses around $14 million a year and it's time to move on.

While Tempelhof's closure is pretty certain, its future after that is less so. The building is a historical monument, so it can't be torn down. There has been talk of a university or library moving in, and the airfield itself could become a park or a housing development. Local politicians say even if the planes leave, Tempelhof won't disappear.

"Tempelhof was the thorn in the old Soviet bear's rear end," he says. "I know their problem — it's a financial one. But at some point, my feeling is, a national shrine ought to be worth at least some bucks."