Accessibility links
'Caramel' Comedy and romantic conflicts abound in a Beirut beauty salon in Caramel, a kind of Lebanese Steel Magnolias. The premise isn't new, but the comedy is warm, observant and generous — so Caramel feels plenty fresh. 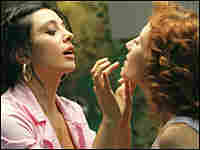 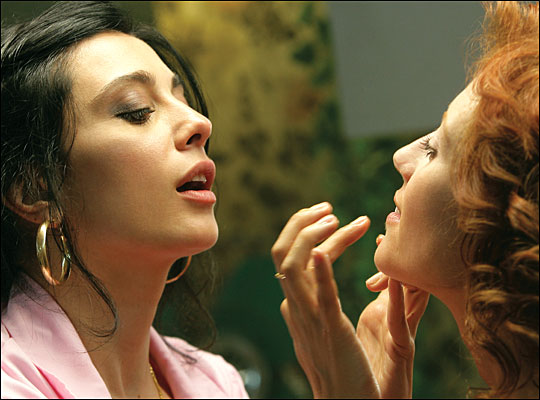 Layale (Nadine Labaki) adds a little color to the life of a customer (Gisele Aouad) in Caramel.

This romantic comedy — sort of a Lebanese Steel Magnolias — takes the beauty-salon-as- support-group notion to Beirut and gives it a Middle Eastern makeover. A graceful touch when it comes to local customs and religious strictures allows the film to comment lightly on social concerns while concentrating on the women who work and chill out at the shop.

Proprietor Layale (played by director Nadine Labaki) dallies with a married man on her breaks only to have his wife stop by as a new client. Also on staff are Nisrine, a bride-to-be who opts for minor surgery so she'll seem a virgin on her wedding night, and Rima, a lesbian shampooer who falls for a glamorous client.

Customers include a past-her-prime actress who requires special help for auditions, a seamstress who wants to impress an elderly suitor, and a policeman who has a crush on Layale but is still duty-bound to ticket her car every day.

Though the premise is hardly new, this warm, observant, generous comedy (which takes its title from the taffy-like confection the shop uses to wax clients' legs) still manages to feel plenty fresh.