Accessibility links
Unwelcome Spirits Haunt 'The Bedlam in Goliath' When The Mars Volta purchased a ouija board in a Jerusalem curio shop and began to use it, the band had no idea how much it would affect its recording. Listening to The Bedlam in Goliath, the paranormal talk might not seem like such a publicity stunt. 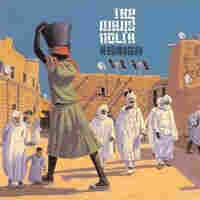 The Mars Volta's fourth studio album is The Bedlam in Goliath. hide caption 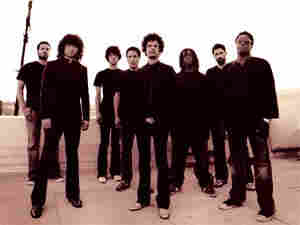 As origin stories go, this one's a doozy. While on tour, The Mars Volta bought a ouija board at at Jerusalem curio shop. The band used the board as a game, part of its after-show wind-down ritual. Then, according to guitarist and songwriter Omar Rodriguez-Lopez, things got strange.

Through the board, the same spirits started visiting night after night. Their communications partially inspired the lyrics — and even the sounds — The Mars Volta was developing for its new album.

When the band went to the studio to record, chaos ensued. Rodriguez-Lopez says the messages coming through the ouija board got scary. The studio flooded. There were a series of equipment malfunctions. Fearing that the spirits were behind the problems, Rodriguez-Lopez says he broke and buried the board so the group could finish the album. It sounds preposterous, but spend some time with The Bedlam in Goliath and the paranormal visitations begin to seem almost plausible.

At times, it seems The Mars Volta is getting assistance from some of music heaven's luminaries. On the eight-minute headspinner "Metatron," there are collisions of instruments Charles Ives would love, and hiccuping odd-meter hijinks straight out of the Frank Zappa songbook. In a heartbeat, The Mars Volta can go from super-fast rock into a prayer-meeting gospel groove that could have originated in Charles Mingus' workshop.

When Rodriguez-Lopez hears the album now, he says it takes him back to the 37 straight days he spent in the studio, and to the unwelcome spirits that were flying around while his band was trying to work. That's audible — The Bedlam in Goliath is thrilling and a little bit terrifying at the same time. It's like some kind of sinister amusement-park ride. You get in and discover that Satan is at the controls, and he's smiling, and he has no intention of slowing down until everyone's screaming at the top of their lungs.