Accessibility links
What Would Bloomberg's Platform Look Like? Advisers say New York City Mayor Michael Bloomberg may make an independent run for president. It's hard to guess what issues would define his candidacy — considering he's been a Democrat, a Republican and now an independent. 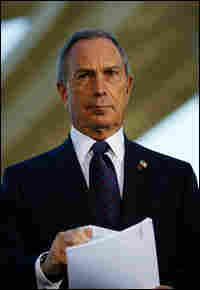 Third-party candidates usually share one common trait: being passionate about their beliefs.

Ralph Nader in 2000 loathed corporate interests. H. Ross Perot lived for his charts and graphs about the national debt. George Wallace, running in 1968, railed against integration by school busing.

But New York City Mayor Michael Bloomberg does not get riled up too much. Rather, his passion is efficiency.

"We are committed to make our city government quicker, leaner, stronger, better," he has said.

It may not sound inspirational, but in New York City, getting anything done is the impossible dream. Bloomberg won his second-term election by a landslide by reciting his list of his accomplishments — including lower crime, higher school test scores and a humming economy. This is the same type of platform he could promote if he runs for president as a third-party candidate, as advisers suggest he may.

Doug Muzzio is a professor of public affairs at New York's Baruch College. He describes Bloomberg's ideology as one of "competent management."

But in a presidential race primarily dominated by hot-button issues, Bloomberg would have to make a case for where he stands, and that's not easy to uncover.

Bloomberg was a life-long Democrat who became a Republican — and then recently announced that he was independent.

On social issues, Bloomberg often takes more liberal stances than the three major Democratic candidates. He has said he supports the legalization of gay marriage. He has called the death penalty "murder by the state," and he has made tougher gun laws one of the missions of his second term.

"He believes government is a force for progress. Government is good in Bloomberg's views," Muzzio said.

Bloomberg's government arguably has been good for New Yorkers. He banned smoking in bars and trans fats in restaurants; he launched a massive customer service phone line for residents; and, as his opponents will point out if he runs for president, he raised property taxes by 18 percent.

Still, it is unclear if Bloomberg could win over economic conservatives — even with his relentless pro-development, pro-business bent. In Washington, he chided lawmakers last week for offering checks as an economic stimulus. Though he has called for help for homeowners struggling with foreclosure, he has also all but blamed borrowers for taking out risky loans and lying on applications.

As for Bloomberg's foreign policy positions, those are more difficult to decipher. When asked about Iraq, he usually mentions that no one wants troops to stay, but he does not offer suggestions for how they could leave.

But none of this seems to matter for the independents, who say they would support a third-party candidate such as Bloomberg. In Port St. Lucie, Fla., voter Tony Esposito wanted Bloomberg to run — even though he was not very familiar with Bloomberg's policies.

"He doesn't have to agree with me on everything," Esposito said. "The country needs a boss, and that man — I think he could do it."

In his own biography, Bloomberg admits that he likes being the boss. But, as of right now, he denies that he is running for president.